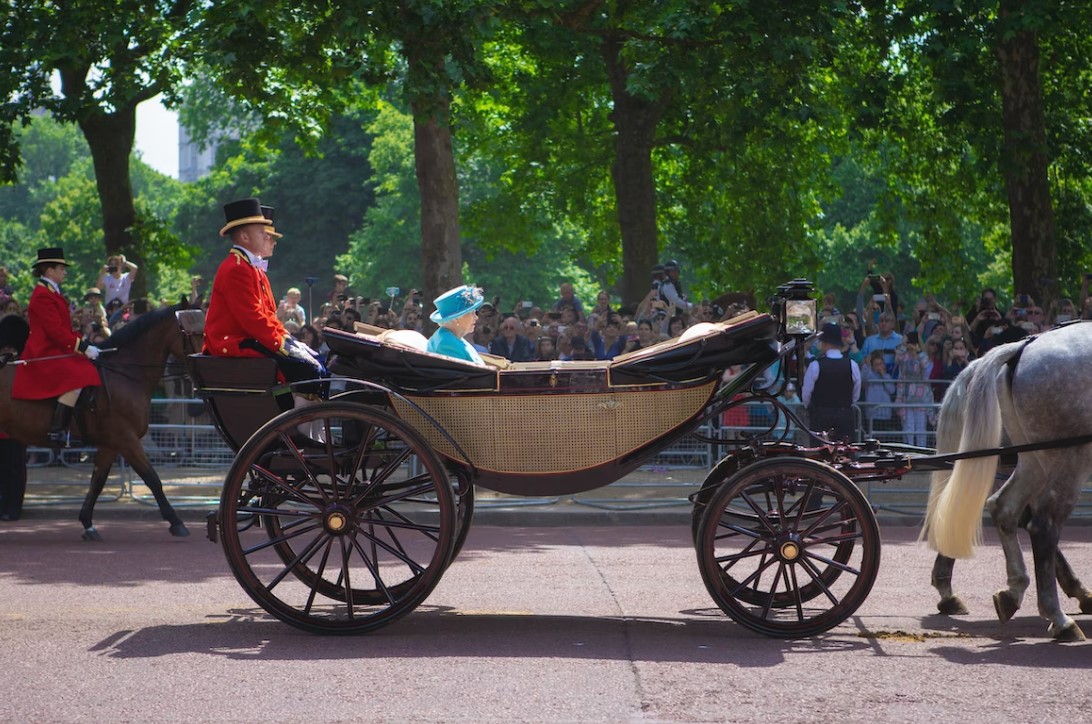 The longest-ever reign of Queen Elizabeth II, the only monarch most of her subjects have ever known, is over. Elizabeth Alexandra Mary Windsor died Thursday at Balmoral Castle, her estate in Scotland. She was 96.

The palace issued a black-bordered statement about 6.30 p.m. local time: “The Queen died peacefully at Balmoral this afternoon. The King and The Queen Consort will remain at Balmoral this evening and will return to London tomorrow.”

Buckingham Palace issued another black-bordered statement from “His Majesty the King,” shortly after her death.

“The death of my beloved Mother, Her Majesty The Queen, is a moment of the greatest sadness for me and all members of my family,” the statement said. “We mourn profoundly the passing of a cherished Sovereign and a much-loved Mother. I know her loss will be deeply felt throughout the country, the Realms and the Commonwealth, and by countless people around the world.

“During this period of mourning and change, my family and I will be comforted and sustained by our knowledge of the respect and deep affection in which The Queen was so widely held.”

As the 41st monarch since William the Conqueror in 1066, Elizabeth was the symbol of stability as Britain and its 1,000-year-old monarchy sailed through roiling storms of the modern age, including a deadly pandemic.

Queen Elizabeth II died ‘peacefully’ under medical supervision:William, Harry traveled to be by her side

Elizabeth enjoyed robust health most of her life, but lingering “mobility issues” affected her in recent months. She increasingly handed over duties to Charles, from the recreational to the constitutional. Last week, she couldn’t attend the annual Highland Games, the Braemar Gathering, which she never missed throughout her reign.

On Tuesday she presided over the transition of one prime minister to a new one, a constitutional duty as head of state which took place at Balmoral for the first time in her reign.

But on Wednesday, the palace announced she would not be able to attend via Zoom the meeting of the Privy Council, the standing committee of senior governmental advisers, after doctors’ orders to rest.

She also missed significant appearances in June during the four days of celebration of her Platinum Jubilee of 70 years on the throne.

In February, two weeks after marking the 70 anniversary of her ascension to the throne in 1952, the palace announced she had tested positive for COVID-19. During an audience in mid-February, the queen mentioned to her visitors that she had difficulty “moving,” leading to “ongoing mobility” issues, as Buckingham Palace put it, that prevented some appearances, including the State Opening of Parliament on May 10.

She had missed this important head-of-state role only twice before during her reign, both for pregnancies, but for the first time she officially delegated Charles to stand in for her, accompanied by his elder son, Prince William.

She was preceded in death by Prince Philip, Duke of Edinburgh, her husband of 73 years, who died April 9, 2021, at Windsor Castle at age 99, just short of his 100th birthday. He was Britain’s oldest and longest-serving royal spouse in 10 centuries.

His funeral yielded poignant pictures of the queen, alone and masked, in St. George’s Chapel at Windsor for a sublime service attended by only 30 members of his family amid COVID-19 restrictions. At the end of March, she appeared in public for her first major in-person gathering since her COVID-19 diagnosis, leading her family, dozens of foreign royals and hundreds of Britain’s great and good in a service of thanksgiving for the life of her late husband at Westminster Abbey.

The death of a monarch is followed by a flurry of rituals, including an address to the nation by the new king and by the prime minister, followed by long-established funeral plans carried out with military precision.

For now, however, Britain prepared to mourn.

The plans include a funeral worthy of the devout and dutiful woman who pledged herself at age 21 in service to her nation and never wavered as the living symbol of the British people.

She reigned, never ruled, as Britain’s head of state and constitutional figurehead for decades. She acceded to the throne on Feb. 6, 1952, when her father, King George VI, died at age 56. She was just 25.

Having celebrated her Diamond Jubilee of 60 years on the throne in 2012, she was the U.K.’s oldest monarch ever, and the longest-serving, surpassing her great-great-grandmother Queen Victoria, who reigned 63 years and died in 1901.

More than half the people alive in Britain today have known no other monarch on their throne, their coins, their bank notes and their stamps. A modest, even shy girl, she became the most famous woman in the world, the most photographed and depicted human being in history, who met and shook hands with an estimated 4 million people or more during her reign.

She inherited a sun-never-sets empire just starting to disintegrate, then presided over its final collapse into a Commonwealth of nations that looked to her as its leader, and to which she was deeply committed to the end. She was Britain’s stiff upper lip during the 20th-century post-World War II recovery, the last gasps of the empire, the Cold War and the war on terrorism.

In her colorful hats and her sturdy sensible shoes, her ever-present handbag on her arm, she was a constant through kaleidoscope changes as the 20th century roared into the 21st: the growth of television, Beatlemania, Britain’s demographic transformation to a multi-ethnic society, and the rise of a celebrity culture that ensnared nearly every member of her family.

She adapted to changing times by changing – and yet not changing on the important things, such as maintaining a dignified silence – while embracing the internet age with a palace website, Facebook and Twitter accounts, and even a royal channel on YouTube.

She was stoic and carried on through the antics and scandals of members of her family. Most recently, she had to weather the public downfall of her son Prince Andrew for his friendship with convicted sex offender Jeffrey Epstein, which later led in an embarrassing civil lawsuit accusing him of sexual abuse. And her grandson Prince Harry’s decision to move to America with his wife, Meghan, and leave royal life behind resulted in months of recriminations further inflamed by accusations of racism (hotly denied) in the royal family.

When it was necessary, she shed her usual reserve. She presided over the heart-rending 1997 funeral of her former daughter-in-law, Princess Diana, the “people’s princess.” She did it – despite her desire to protect Charles and Diana’s two sons – to save the standing of the monarchy from a grief-maddened populace enraged by what seemed to be royal coldness and detachment in the wake of Diana’s death in a car crash in Paris.

If the queen seemed occasionally out of step with the accelerating changes, she redeemed herself and the monarchy by adjusting, and she gained new popularity and admiration in her later years. Always deeply respected, she was beloved by the time she reached 80, helped partly by the release of the film “The Queen.” Dame Helen Mirren’s transcendent performance as Her Majesty won her the Academy Award for best actress in 2007, and her tribute in her acceptance speech is as apt a eulogy as any.

“For 50 years and more, Elizabeth Windsor has maintained her dignity, her sense of duty – and her hairstyle,” Mirren said in her acceptance speech. “She has had her feet planted firmly on the ground, her hat on her head and her handbag on her arm. She has weathered many, many storms. And I salute her courage and her consistency.”

What happens to the monarchy after Queen Elizabeth’s death?

Biographers point to the queen’s devotion to duty as her most important personal and professional characteristic, raising questions about whether the monarchy can survive long without her. Even foes of the monarchy, known as republicans in Britain, acknowledged they admired her. They see the monarchy as a hereditary institution wrapped in wealth and privilege that has no place in a modern democratic society; they credit her with not only saving it but making it more popular than ever.

“She will be remembered for keeping the British monarchy going through the 20th and into the 21st century – and for leaving it in better shape,” says Robert Lacey, the British historian and biographer who has written four books on the queen. “She was imbued with a great sense of duty and responsibility. In the long run, that would be a strength and her charm.”

Elizabeth’s sense of duty was established early in her life during the monarchy’s worst modern crisis: the abdication of the throne by her uncle, King Edward VIII, in 1936. The abdication shocked Britain, especially after the government and palace had kept the crisis out of the headlines until almost the day it happened. From the perspective of commoners and dukes alike, the former king was seen as shirking his duty and turning his back on his country.

The profound effect on 10-year-old Elizabeth, Lacey says, is that from then on duty was her watchword. Unlike Edward, the queen swore to never abandon the role she was thrust into by chance of birth and thus throw the monarchy and nation into crisis.

She was unlikely to be queen when born the first child of Prince Albert (Bertie) and the former Lady Elizabeth Bowes-Lyon, the Duke and Duchess of York, on April 21, 1926, at her parents’ townhouse in London. Her father’s eldest brother, known in the family as David, was the Prince of Wales and heir to the throne after his father, and her grandfather, George V. Although single when he became Edward VIII in January 1936, he was still young enough to marry and have children.

Elizabeth spent her early years in quiet family life, largely at family estates in the country, where she developed a lifelong affinity for horses and dogs, especially Welsh corgis. That bucolic life was shattered after Edward quit the throne in December 1936 to marry Wallis Simpson, a twice-divorced American.

Serious debate about getting rid of the royals will come only under a monarch less astute, less admired and more gaffe-prone than Elizabeth on the throne, Smith says. “Her most enduring quality was her ability to hold onto power.”

Lacey considers that a fitting tribute to a woman who devoted her life to performing a role she didn’t choose.