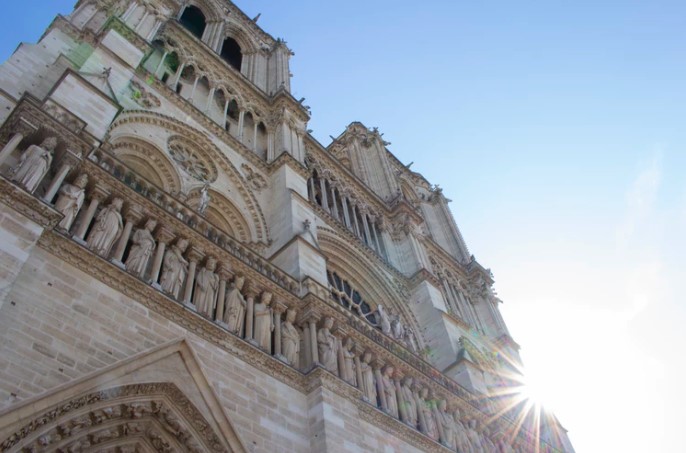 The Fire at Notre-Dame Cathedral Is Finally Out, and Investigators Are Asking What Happened

The massive fire that broke out at the Notre-Dame Cathedral in Paris on Monday has been put out, after a long battle with the flames by 500 firefighters overnight. The fire set off an alarm in the cathedral around 6:20 p.m. Paris time, after which tourists and people in the area were quickly evacuated. Initial reports said that officials think “that it could be linked to renovation work.” Construction on Notre-Dame de Paris, its official name, began in the 12th century, and the cathedral has been restored several times since. The fire quickly spread to the roof’s wooden beams, known as la forêt, some of which date back to the cathedral’s first hundred years.

Though both belfry towers of the cathedral were saved from the fire (which could have led to the total destruction of the building, experts said), the nearly thousand-year-old structure sustained unimaginable damage from heat, fire, and water poured in by firefighters. Three holes in the structure have been identified, including one from the collapse of the iconic central spire, which sent witnesses in the streets reeling as it fell.

Now that the fire has been extinguished and the structure has been found structurally sound, officials have begun investigating what happened and are considering it an accident—a Paris prosecutor told journalists that “nothing at this stage suggests a voluntary act.” Contractors were working on renovations before the fire began, though they were not on-site at the time.

At risk from the flames also were dozens of religious relics and sacred works of art that are now being safeguarded and sent for restoration to the Louvre. The culture minister, Franck Riester, said religious relics saved from the cathedral, including the crown of thorns and the tunic of Saint Louis, were being securely held at the Hôtel de Ville, and works of art that sustained smoke damage were being taken to the Louvre, where they would be dried out, restored, and stored. Three beloved stained-glass rose windows appeared to be intact, according to The Guardian.

Two fashion industry billionaires led the way toward rebuilding the cathedral: On Monday night, François-Henri Pinault, the chairman and CEO of the luxury conglomerate Kering, and his wife Salma Hayek pledged 100 million euros to aid in the restoration of the cathedral. Among Kering’s stable of brands are Gucci, Saint Laurent, Alexander McQueen, and Balenciaga. Soon after, Bernard Arnault, the chairman and CEO of rival corporation LVMH, pledged 200 million euros for the cathedral’s repair. A group of other wealthy donors, in addition to ordinary citizens, has put the fund-raising efforts reportedly over 600 million euros in less than a day.

On Monday night, French citizens gathered on bridges and in the streets to watch and mourn the building as the fire continued to burn.