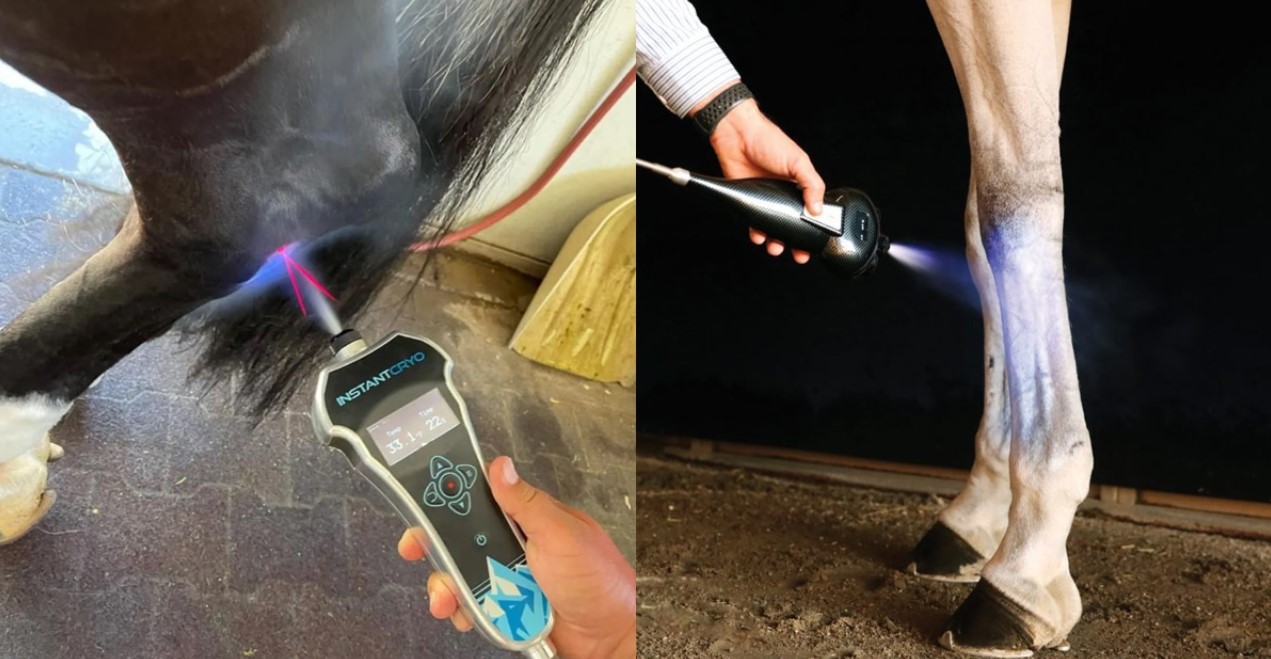 Most equestrians are familiar with the benefits of using cold to treat inflammation or injury, whether it’s strapping ice packs onto your horse’s legs or the classic cold hose. But there’s something new on the market which offers to take the use of cold to a whole new level: handheld cryotherapy devices for equines.

Simply put, cryotherapy is the therapeutic use of cold. Horses are cryotolerant and can withstand unusually low temperatures. A human exposed to the same temperature would get frostbite, but horses are able to tolerate near-freezing temperatures without some of the same side effects. Cryotherapy has been used in the recovery of racehorses, usually through “ice chambers” that encompass a horse’s entire body. Using liquid nitrogen, the chamber can drop as low as -140°C. The benefits of this treatment include reducing inflammation, accelerating muscle recovery, and decreasing downtime due to an injury or surgery.

How do the portable devices work?

ECB, the manufacturers of Equine Spa, are behind the latest handheld cryotherapy device called InstantCryo. The device works by sending a steady stream of carbon dioxide (CO2) gas at a temperature of -108°F (-78°C) to the intended treatment area. Within 30 seconds, the surface temperature of the horse’s skin is reduced to 39°F (4°C). It offers a lot more precision than the ice chambers, as it’s able to target even small areas. This intense cooling creates a thermic shock and initiates four physiological processes in the horse, which ultimately relieve pain, decrease inflammation and swelling and increase recovery.

Another company, America Cryo, offers a Subzero Equine Cryotherapy device using pressurized CO2 to target specific areas on the horse’s body to provide pain relief and faster injury recovery. Such localized cryotherapy applied with pressure gets deeper into the tissue than a traditional cryo chamber allows.

The Physiological Effects of Cryotherapy

1) an analgesic response which increases blood flow and thus oxygen to the affected areas and relieves pain instantly. According to ECB, this pain relief can last up to 4-6 hours after treatment.

2) an anti-inflammatory response which sends healing proteins, collagen, and antioxidants to the affected area, removes toxins and decreases inflammation.

3) a vasomotor response, which protects the essential organs and the horse’s core temperature from dropping. This response also leads to an increased blood flow to the affected area, again reducing pain, inflammation and swelling.

4) muscle relaxation, due to the increased flow of oxygen, hormones, and nutrients to the affected area. This relaxation of muscles can increase the rate of recovery and can even increase their resilience to future injury.

ECB claims that the device can be used to treat horse tendon injuries, ligament injuries, heat and inflammation, muscle injuries, frequent injuries of the anterior SDF, bursitis and synovitis, arthritis, cellulitis, hematomas, and joint injuries/diseases. But how effective are the devices in practice?

Annie King, DVM, an equine veterinarian based in Calgary, Alberta, has used cryotherapy devices (or “cryo guns”) for treating various hock injuries and general distal limb issues, in addition to recently using one to remove a tumour. In the case of the tumour, it was in an area that interfered with riding; this location additionally made it a hard place to heal. After cutting off the tumour itself, cryotherapy allowed the vets to freeze the area and kill the tissue, so that hopefully the tumour would die.

In her experience, King says cryotherapy does offer some neat options for treatment, but you don’t see the long-term outcome of cryotherapy straight away.

Studies have also consistently shown that cryotherapy is an effective treatment of laminitis. A December 2021 article in Veterinary Clinics of North America: Equine Practice refers to distal limb cryotherapy as “currently one of the best therapeutic interventions available to veterinarians to help prevent the development of laminitis and to help treat acute laminitis in the early stages.”

The number of treatments required depends on what is being treated. Some issues, such as removing a tumour, may require just one or two treatments, while other conditions may benefit from regular, ongoing treatment.

Are cryotherapy devices safe for horses?

While the device does make some noise and creates a visible cloud of carbon dioxide gas, King says that the horses she’s used it on have always tolerated it very well ‒ but notes that the horses receiving treatment have always been lightly sedated. “We do use sedation,” King says, “so it would be interesting to see the applicability of their use in the general public, safety-wise.”

The portability of the device does mean that it can be used anywhere, at any time; and holding up a device at home may certainly be easier than trailering and acclimating your horse to a full-body cryotherapy chamber. However, King also notes that the cryo guns require liquid nitrogen, which can be tricky to store, further inhibiting their potential for widespread use.

So far, the use of handheld cryotherapy devices seems to be mostly found at elite training barns or rehabilitation facilities. Irish Olympic medallist Cian O’Connor acquired one for his barn and in an Instagram post notes that it’s “great for travelling and home”. (Note that current FEI veterinary regulations state that cryotherapy, like shock wave therapy, is prohibited at FEI events and in the five days prior to competition.)

The cost of a basic handheld cryotherapy device starts at $4,990 USD and prices go up for cryo guns with additional features such as thermal detection cameras. Across Canada, only a select number of veterinarians are utilizing these devices.

Although cryo guns offer an exciting range of potential uses, portability and reported effectiveness, only time will tell whether they become more common in treating our equines.

Watch a stifle being treated with a cryogun here: 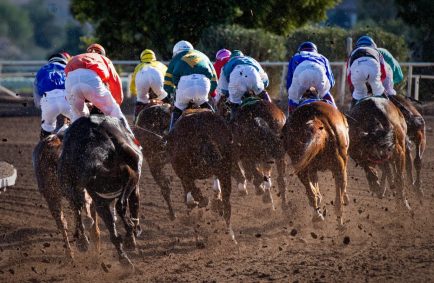