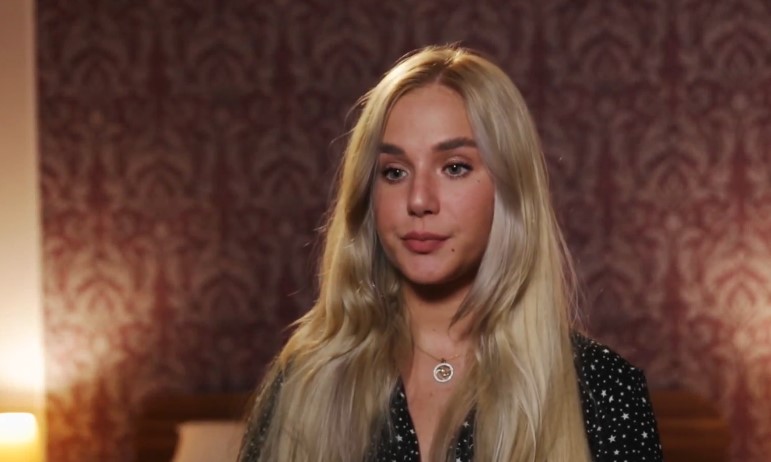 90 Day Fiancé: Before the 90 Days Ends With Caesar and Maria Telling Their Differing Sides of the Story

So, this is how 90 Day Fiancé: Before the 90 Days season three ends? Not with a whimper, but with a 3-hour installment full of tears, arguments and surprises? Yep.

Part two of “The Couples Tell All” not only featured Angela ready to get into a fight with just about everybody except Jesse (who was there…to talk about the lectures he gives to rooms full of about 20 senior citizens?), but it also featured a long awaited conversation between Caesar and Maria. Yes, Maria is real.

Prior to chatting with her, Caesar assured everybody he was done with Maria. He said they had no relationship. This revelation seemed to please just about everybody, especially defenders Timothy and Avery, but it all changed when Maria popped up on the video call. After he looked back at his story, Caesar said it was “heartbreaking” because he had such faith in her.

Following his recap segment, Caesar confirmed he kept the ring he bought for Maria—along with the whip and edible underwear—just to have in case. He maintained the relationship was completely done, and then Maria joined the conversation.

“First, I wanted to say something,” he told her. “Are you seeing somebody else?

However, in her package that aired in the finale, Maria said she was seeing other people while she was “dating” Caesar. “It was kind of a joke,” she explained. Maria said she considered Caesar a boyfriend for the last two years (Caesar said their relationship was off and on for the last five years), and now she just wants Caesar to move on and find somebody else, something she repeated multiple times.

When asked if she loved Caesar, Maria said she did. So, if she considered him her boyfriend for two years, why did they never meet? She said she had visa issues. Why didn’t Caesar go to the Ukraine? Maria said because of the weather. As for the money, Maria said it wasn’t anywhere near the $40,000 Caesar said he gave her. She estimated by $5,000 the whole time. What about the money right after the botched Mexico trip? She said she declined, Caesar said that’s not true.

“I just don’t know why she’s doing this,” Caesar told the group.

Maria said she felt Caesar was trying to paint her as the villain, but Caesar said right then and there he wanted to show the world she’s a good person and said he still wants to bring her to the United States and he’s still in love her with her. He even said he wanted to go “down there to Ukraine” before bringing her to the States. Going on TV and declaring his love for her was his last option, he said. But Maria, again, said he needed to move on.

“You’ll always be there in my mind…you’re always like my first love, baby, you’re my everything, baby,” Caesar said.

As the taping wrapped up, Caesar said he loves and cares about Maria a lot, but he’s going to give her a break to let her do whatever she wants. “I’m just done,” he said. But then added, “Only time will tell.”

“Actually, I agree with him and we need to move on, he especial. Caesar you are stronger than you imagine,” she told him. On his way out the door, Caesar said he feels like he wants to be alone to nurse his broken heart. “I wanted to show her how bad I was fighting for her,” he said. “I don’t know if she saw that.” Now, he wants to walk around the world a bit and “just get lost,” he said.

“I know whoever I’m with, I’ll always have a place for her in my heart,” he said about Maria.

The couple never ran into Jesse, but they did rehash a lot of their time together, including all the talk about Jesse. Tom said he understood why it kept coming up, but hoped it was in their past. He planned to spend his remaining time in New York with her.

Darcey’s ex Jesse was part of the reunion, not to interact with her and create drama, he maintained, but to update the world on what he’s been up to. His presence divided the season three cast members with Avery and Timothy telling him off. Angela got involved and said everybody was bullying Jesse, which prompted several truly bizarre confrontations between Avery and Angela, Angela and Rebecca and Angela and Avery’s mom. Angela seemed more than ready to fight with every and anybody.

“I’m not going to do this. Are you trashy like this for real? I’m not going to lower myself,” Rebecca said as Angela got in her face. Angela then responded she was trashy all day long and said Rebecca needed to kiss her ass.

Once everybody calmed down, Jesse told host Shaun Robinson he got his degree and is acting, working as an online trainer and giving seminars about finding love. The footage of his seminar shown was Jesse in a room full of senior citizens. Other footage from his life without Darcey included Jesse telling friend she was stalking him, and he threatened a lawsuit.

After the big fight, Angela and Michael recapped their journey, still stuck on the fact that they want one of Angela’s daughters to donate an egg so Angela can tote a baby and make Michael a father. Angela’s daughter remained firm and said she would not be donating one.

“The bottom line is we’re together. We’re stuck together. Skyla we’re going to talk,” Michael said.

He is awaiting his visa interview and the hope is he’ll be in the United States by the end of the year. Angela departed the reunion early and walked out holding a box of snacks while every other cast member stayed to finish the reunion.

Benjamin still needs to finish paying the bride price. How much? “Something that he can manage,” Fidel, Akinyi’s brother said. It’s something Benjamin is well aware of. He plans to return to Kenya for Akinyi’s interview…and to finish paying up.

Timothy still hasn’t gotten Jeniffer a new ring that didn’t belong to one of his exes, but he said he will. The topic of his sexual orientation came up, again, because he and Jeniffer never had sex and Tim said he has been questioned about it for years. He attributed that to stress.

“I’m not gay, I didn’t used to be a woman. I was born a man. I’m not bisexual…it’s not the first time I’ve heard it and it probably won’t be the last,” he said.

Jeniffer said she knows he’s not gay and that he was just respectful of personal boundaries. The plan is for her to come to the United States for a visit. Tim said he still loves her.

“This story is just beginning.”

Her divorce is done, just waiting to be finalized, and Zied’s still waiting to get interviewed for his visa. So, why did she wait to tell him about her divorce? She didn’t want to ruin the trip. And what did she tell him about her past relationship with a woman? She didn’t want to bring him to the United States if he was homophobic. Zied explained he was angry about everything and they both feared what would happen if his family found out. In the next two months, she said she’ll return to Tunisia to visit.

Omar had signed off long ago, but Avery said she planned to return to Lebanon to visit him while they worked out the living situation.