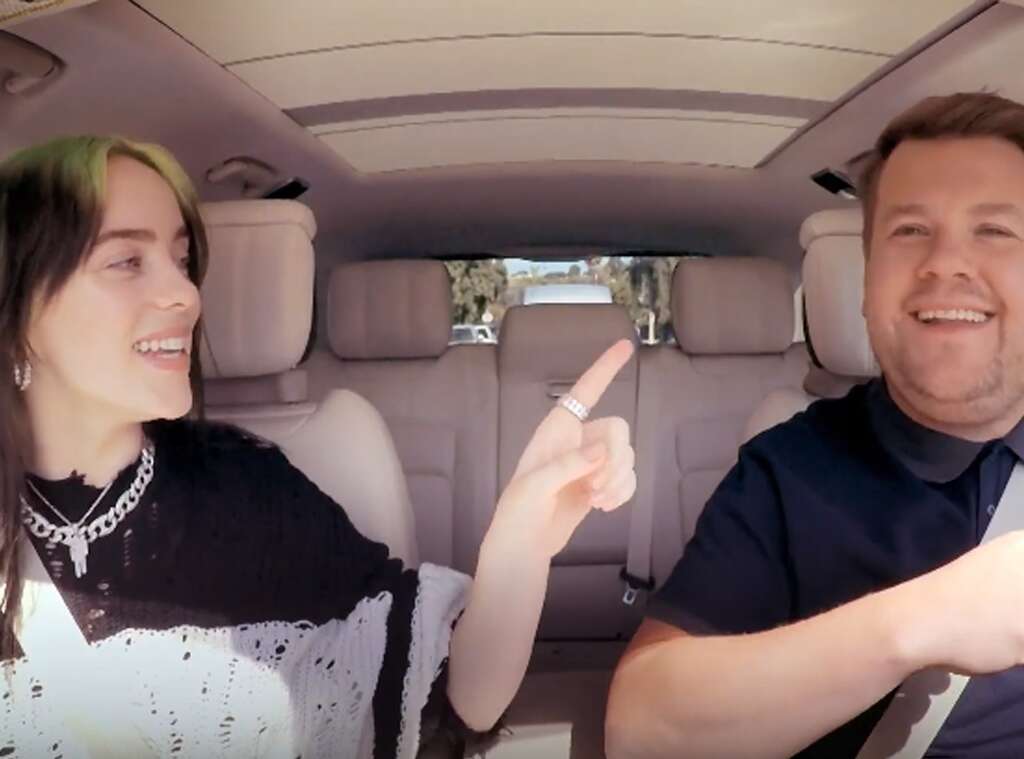 This is everything I wanted and more!

On Thursday, Billie Eilish joined The Late Late Show Carpool Karaoke hall-of-fame—and it was filled with dance breaks, nostalgia and tons of surprises. Dressed in an oversized striped sweater and donning her edgy neon green-black hair, the 17-year-old sang along to her hit songs “bad guy,” “all the good girls go to hell,” “ocean eyes” and “when the party’s over.”

After a high-energy performance of her Grammy-nominated song “bad guy,” Billie, who is a longtime Belieber, recalled the moment she met Justin Bieber at the 2018 Coachella Festival.

“All Coachella weekend, I was like, ‘Don’t surprise me with Justin Bieber,” she told host James Corden. “I can’t take it. I can’t…have to do this show and Justin Bieber’s going to be there. And so, we go to see Ariana [Grande] and I was just standing there…and I saw…I know his body language, I know how he stands, I know where he wears his pants…”

“So I look over and I just was like,” she continued. “And he just stood there. He didn’t even come near me. He just stood, like, five feet away from me, perfectly still.” Thankfully, a fellow concertgoer captured the amazing meeting on video, so she can relive it forever.

Moving back to her own discography, the duo sang “all the good girls go to hell” and couldn’t help but bust out some dance moves to the song’s infectious beat.

Taking a singing break, the Late Late Show host surprised Billie with a ukulele so she could give him a lesson on how to play. “I wrote my first song on the ukulele with my friend—I think I was seven,” she told James before treating him to a snippet of it. Then, the pair jumped into her song “ocean eyes.”

“This song gave me my life,” she told James as the song began to over the radio. “I was 13 recording this song. This song makes me emotional…Well, just that song is the reason that I have the life I have.”

Still feeling nostalgic, James drove Billie to her childhood home in Highland Park, Calif. and she reminisced about working on her debut album When We All Fall Asleep Where Do We Go? in brother Finneas’ bedroom.

Watch Billie relive her whirlwind year, sing her hit songs and introduce James to her pet spider in the video above!