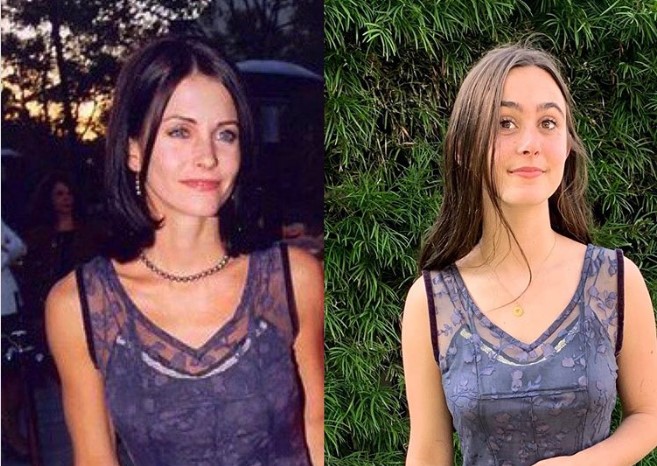 As the saying goes, “everything old is new again.”

And that couldn’t be more true for Courteney Cox and her daughter Coco Arquette, who seem to be following that motto. The Friends actress shared an early throwback photo of herself, but for good reason: she showed a side-by-side of her 14-year-old daughter rocking her vintage dress from 1998.

“I’m not one to hold onto things but this was a damn good purchase! 21 years later…,” the 54-year-old brunette beauty shared on Instagram, along with a pic of her from the late ’90s and one of her daughter wearing the hot number.

As for the “oldie but a goodie?” The vintage piece is a purple peek-a-boo dress that’s adorned with embroidered flowers and velvet trim straps. Cox actually wore the chic design at the Hollywood premiere of Snake Eyes.

She and her man at the time (and Coco’s dad), David Arquette, attended the movie premiere together. Although, he opted for something a bit more flashy, wearing an all-red ensemble. From the fire-engine red silk button-down to the fiery paperboy cap, he didn’t dress subtly.

Courteney is currently engaged to Johnny McDaid, one of the band members of Snow Patrol. They announced their engagement in 2014, but called it off a year later. However, in 2016, the pair reconciled and confirmed their relationship after walking the red carpet together.

As for the 47-year-old actor? He married Christina McLarty in 2015. Moreover, the couple shares two sons, Charlie West Arquette and Augustus Alexis Arquette.