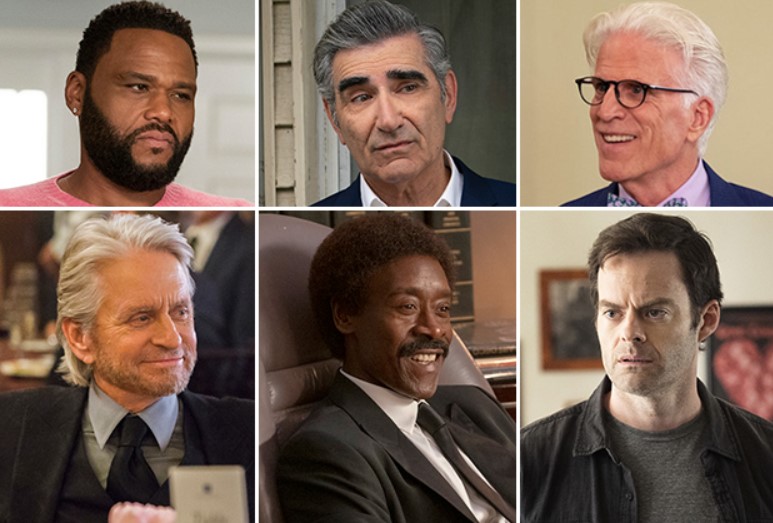 Emmys 2019 Poll: Who Should Win for Lead Actor in a Comedy Series?

It’s Veterans Day in this year’s Emmy race for Outstanding Lead Actor in a Comedy Series, with a number of showbiz legends vying for the big prize.

Oscar winner Michael Douglas — who won an Emmy in 2013 for playing Liberace in HBO’s Behind the Candelabra — already claimed a Golden Globe for his lead role in Netflix’s The Kominsky Method, and is looking to add another Emmy to his trophy case. He’s joined by Ted Danson, who nabbed his 17th (!) career Emmy nomination for playing afterlife demon Michael on NBC’s The Good Place, and comedy icon Eugene Levy, up for the first time in this category as Schitt’s Creek‘s formerly wealthy Johnny Rose.

Last year’s winner, Barry‘s Bill Hader, is also in the mix again for the HBO hitman comedy’s sophomore run, along with Anthony Anderson, nominated for the fifth straight time as dad Dre on ABC’s black-ish. Rounding out the field is Don Cheadle, for his role as maverick stock trader Maurice “Mo” Monroe on Showtime’s freshman ’80s satire Black Monday. (Cheadle returns to a category that saw him earn four straight nods for Showtime’s House of Lies.)

Will the old guard win out, or should a (relatively) young whippersnapper claim the Emmy instead? You tell us: Vote for your favorite in the poll below, then hit the comments to defend your pick.