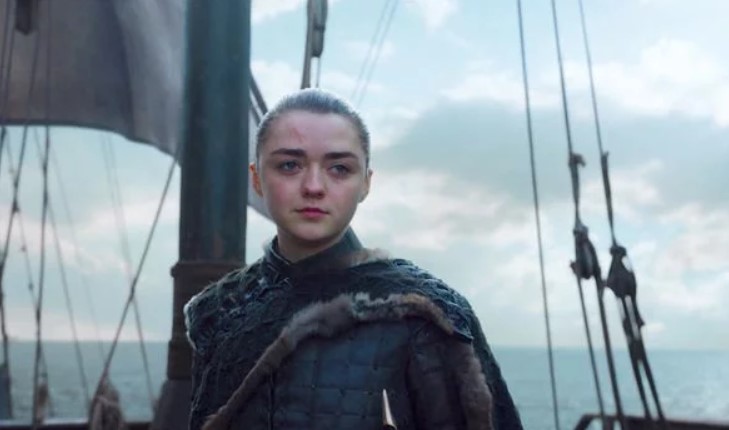 Game of Thrones: Arya is WRONG about what is West of Westeros – Hidden clue in the books

Arya has always seemed to sure of herself. More than anyone else, Stark or otherwise, Ned’s favourite always had a sense of sense and a growing sense of purpose. Now that one mission is complete (even though she didn’t actually cross off all the names on her list herself), Arya has anyother quest fixed ahead. When she explains it to her siblings on the docks at King’s Landing during their heartbreaking partings, she seems so certain, but she might actually be wrong…

Asked why she was setting sail and so sure she would never come back, Arya gave a typically assertive answer.

She told Jon, Sansa and Bran; “What is West of Westeros? No one knows. It’s where the maps stop. That’s where I’m going.”

Except Arya was wrong on two counts.

We know the saga is set on a planet like our own, a globe. George RR Martin and the TV show never filled in all the blanks around the edges of Westeros and Essos. But we already know there are lands to the south of Essos. Sothoryos and Ulthos can be shown peeking up at the very bottom of maps. It stands to reason there must be more continents.

Furthermore, Arya is NOT the first to sail West looking for them. In fact, she has rather a lot in common with the fearless woman who did just that over 250 years earlier. And reappeared many years later.The amazing Elissa Farman was also noble-born and close to the most powerful lords and families of her time. She refused to bow to convention, almost certainly was in love with her friend Princess Rhaena Targaryen and is believed to be the person who stole the three dragon eggs which ended up with Daenerys.

Arya would have approved of her wholeheartedly. Elissa always dreamed of adventure and exploring new lands. When Rhaena established her own court at Dragonstone, Elissa kept petitioning for money to build her own ship. She was constantly denied, which created a rift in their relationship. In 54 AC, which stands for After the Targaryen Conquest, Elissa took three eggs from the clutch of Dreamfyre and fled to Pentos and then Braavos. She sold then to the Sealord and built her own ship, Sun Chaser. News of Elissa’s plans reached Westeros and Sers Eustace and Norman Hightower brought their two ships to join her expedition, pursued in vain by the forces of a furious King Jaeherys, desperate to regain the dragon eggs and punish Elissa.

Eustace returned three years later, reporting that Norman’s ship had been lost in a storm and his crippled when they had sailed South by Southwest of Westeros. Elissa had continued on alone in the Sun Chaser. Around 30 years later Lord Corly Velaryon sailed to Asshai on one of his famed nine great expeditions to Essos (which made him the wealthiest man in Westeros). He claimed he saw the Sun Chaser docked in Asshai. It seems likely that Elissa did sail far West. She did not find the end of the world or anything so deadly that nobody could return. Since she was never seen anywhere else in Westeros and Essos it seems logical she kept sailing West and eventually looped all the way back to the far eastern end of Essos.

Perhaps Arya was wrong after all telling Jon she would never see him again. Sailing West does not mean you disappear from the known world forever. Nor does it guarantee certain death, as most believe in Westeros. Elissa was a fugitive, wanted by the crown, so she could not return. Arya is the opposite. After a lifetime of adventures, it is comforting to think she will return home to see her family one last time.

After all, before anything else, she is still a Stark.