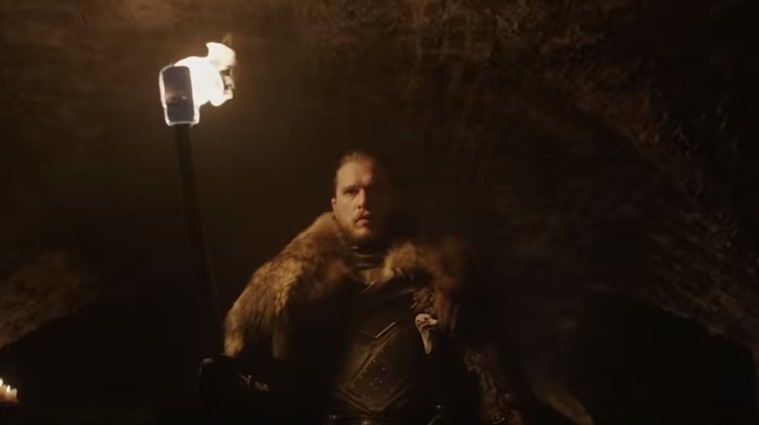 During the Battle of Winterfell, Arya gave Sansa her dagger before she went off to fight and Sansa went down to the crypts. “I don’t know how to use it,” Sansa told Arya, who said to her sister, “Stick ’em with the pointy end.” Sansa’s training has never been about physical combat. She’s been trained by two of the most manipulative people in all of Westeros: Cersei and Littlefinger. She’s gone from being a political pawn to a main power player in Westeros without a sword or a dagger. She’s suffered torture and endless manipulation for years, but she’s survived by playing the game just right. Sansa fully admitted that she “learned a great deal” from Cersei in season 7. Before she had Littlefinger executed in the season 7 finale, she told him that she would never forget his “many lessons.” While Sansa is not a physical fighter, Arya giving Sansa a dagger could come back into play when Cersei meets her end.

While down in the crypts as the battle raged on, Tyrion wanted to go out and fight. Sansa put him in his place to get him to stay. “That’s why we’re down here. None of us can do anything,” she said. “It’s the truth. It’s the most heroic thing we can do now. Look the truth in the face.” For the Battle of Winterfell, Sansa and Tyrion’s strategies couldn’t play a role. When they thought they were going to die, both Sansa and Tyrion were willing to fight and die together. Now that the Night King is dead, Cersei is the main foe.

Most fans believe that Arya, Jaime, or Tyrion will kill Cersei because Arya’s kill list and the valonqar prophecy. In George R.R. Martin’s A Song of Ice & Fire series, Maggy the Frog tells a young Cersei: “And when your tears have drowned you, the valonqar shall wrap his hands about your pale white throat and choke the life from you.” That part of the prophecy was omitted from Maggy the Frog’s speech to Cersei in the show. Maybe that’s for a reason. Maybe Cersei won’t die at the hands of her “little brother,” which is what “valonqar” means in High Valyrian. Maybe she’ll die at the hands of her “little dove” — Sansa Stark.

I find it highly unlikely that Arya will get to kill both the Night King and Cersei. The Night King was her big kill, and I don’t see the show giving her Cersei’s death, no matter how much we want it. Cersei has always assumed that Tyrion would kill her. Jaime would be fitting but the show made a point of not including the “little brother” part of the prophecy. What if it’s actually the person she least suspects? It would be satisfying as hell to watch Sansa kill Cersei with Arya’s dagger. Sansa learned so much from the Queen of the Seven Kingdoms. Cersei helped shape Sansa into the woman she is today. But just like Arya, Sansa harbors a hatred for Cersei. Cersei had a hand in having Sansa’s father, Ned, killed, which Sansa had to watch from just inches away. She helped keep Sansa in King’s Landing and away from her family for years.

With the Winterfell crew heading South to King’s Landing, there are only a few people from the other side that Cersei would allow near her, and one of those people is Sansa. The dagger is going to serve some kind of purpose in the final 3 episodes, and I have a gut feeling that Sansa is going to be the one to “stick” Cersei with the “pointy end,” just like Arya said. Game of Thrones season 8 airs Sundays at 9 p.m. on HBO.