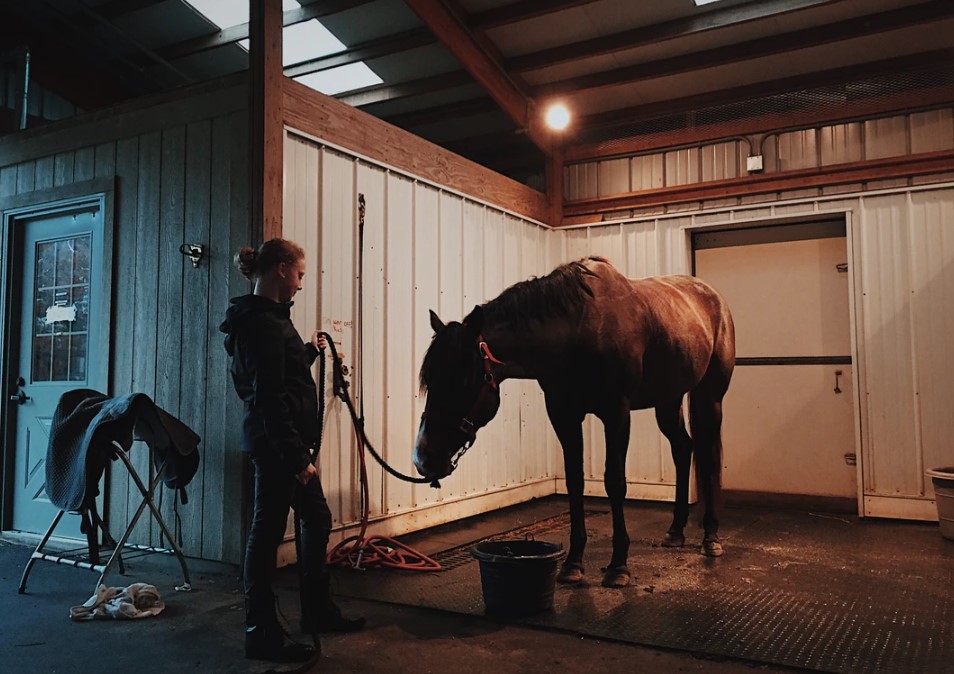 How To Tie A Horse Safely To A Post Or Rail

When it comes to horses, they are large and unpredictable creatures! No matter how placid your equine friend is, it is vital that learn to tie them up safely to a hitching rail or post.

Remember that you are tying your horse to a very solid and secure object. While we don’t want our horses to break free easily, we do need to be able to release them quickly and easily in an emergency. You do not want to be fumbling for a knife if your horse is panicking or stuck!

here is no better way to learn a practical skill than by observing and trying it yourself, so check out this great video on how to tie a safe and secure knot.

So, do you think you have got what it takes to build your own hitching rail for horses?

Follow our guide to building a hitching rail and you’ll be training your horse to hitch in no time!

For feet deep holes should be enough to secure hitching post in the ground and offer maximum rigidity and stability. If you space them seven feet apart, the top rail will overhang a little bit on either side, which is perfect. Recommended hitch rail height is 42 inches (1 meter). This is a good height for both riders and horses when lead ropes are tied properly.

What did cowboys tie their horses to?

Hitching posts are the traditional tool used to hitch a horse or other animal to a post. They are also called a hitch, a hitching post, or a posting. Some of them can be very ornate while majority are just a simple wooden posts, sometimes with a hitch ring. The most common type of hitch ring is a ring with a single hole through which a rope or chain can be passed and tied to a ring or eyelet on the side of a post or other fixed object. But cowboys used to tie their horses to anything available – a fence, a building, a wagon, etc. – that is big enough, strong enough, and anchored deep enough to keep the horse in place and prevent him from straying away.

How do hitching posts work?

Hitching posts were in use for most of the 18th century, before the cars were invented and horses were the primary means of transportation, so carriages and horse-drawn carriages were used. Many homes and even businesses had hitching posts out front, for the owner to tether their animal.
The hitching post itself is a simple post or stake, sometimes with a loop on one end. A chain, rope, or strap attached to the loop serves as the attachment point for the horse’s lead. Some people today still use them for horses, especially in rural areas. In England, a horse tied to a hitching post is known as a “hobbled” horse, as this was the name given to horses that were hobbled and left to graze on uncultivated land.

When were hitching posts used?

The hitching posts most likely originated in Europe. Records show that they were used in England as early as 1625. They were made of wood, and some of the oldest ones were carved out of stone. Many public buildings in England had stone hitching posts and public water troughs for horses and livestock. They were used to feed and water horses and other animals.
The earliest hitching posts in America were probably built in the 17th century. At that time, the hitching post was a wooden peg driven into the ground. Hitching posts were originally used to hitch horses, or a horse-drawn cart. People in rural areas would tie their horses to trees, railings, or other structures to keep them from wandering off.

Where do you tie up a horse?

Attach the horse about 2 inches above its withers or around horse’s eye level. In that way he’s less likely to hurt himself if he suddenly pulls on the rope. Also make sure the rope isn’t too short or too long. When it’s tied, it should be about the height of the horse’s neck to keep it from being stepped over as this could be dangerous. However, tie the rope low enough that the horse’s head isn’t restricted.