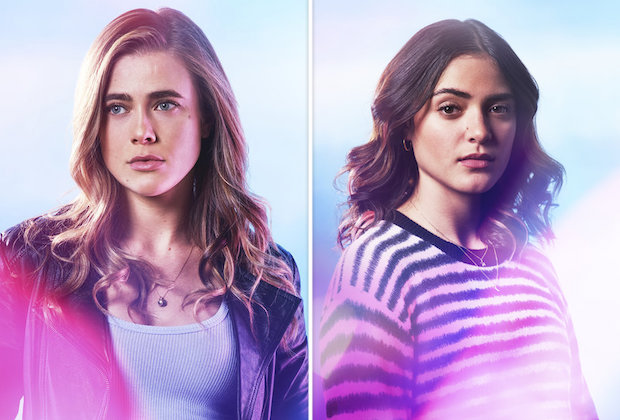 Manifest Preview: Hilarity Ahead for Mick? Will the Believers Betray Olive?

Soon into its second season, NBC’s Manifest not only switched things up by giving Grace callings, it introduced several new faces that could change the Stones’ lives for the better… or possibly for the worse.

For one, Michaela has been assigned a new partner at the NYPD, a development that she warmly embraced. “Jared was the love of her life, but he’s starting to cross lines that Mick can’t handle right now,” Melissa Roxburgh tells TVLine. “He’s not giving her the space to figure out her life and what happened to the plane, so she has to distance herself from that.

Enter Mick’s new partner, Detective Drea Mikami (played by Charmed alum Ellen Tamaki). “I really hope they fall in love or something, because she’s great,” Roxburgh laughs. “They have a bit of a rocky start because she’s not Michaela’s norm — she’s from a higher upper class and is trying to fit in, but Drea does not know how to be normal. She’s super-awkward, and it is hilarious. Ellen is amazing.”

But Manifest being Manifest, might we ultimately suspect that Drea is up to no good, and perhaps finagled this job alongside a key 828er? “We may, we may not,” Roxburgh teases.

As for the actual new love interest in Mick’s life — a trailer played at the TCA winter press tour revealed an (ahem) intimate development for the two — how will Zeke figure into things, behind bars as he is? “Some really big things happen with regard to Michaela and Jared and Zeke,” Matt Long tells TVLine. “That [prison] story sort of concludes in a way, but the way that that concludes opens up alllll kinds of other issues with the three of us, and it’s really interesting and exciting to watch.”

Elsewhere, teenage Olive Stone — who is feeling especially “left out” of the family dynamic, now that her mom is getting callings —  proved ripe for recruitment by the Believers, a cult-is-a-strong-word that fancies the 828ers “as, like, angels,” Luna Blaise tells TVLine. As Olive changes up her hair and starts hanging with Maxine and friends, “There’s a lot that’s going to happen, and without giving too much away, not all of it’s good,” Blaise teases. “I really go into full-force Believer mode and it leads into two different directions — bad things come from it, and great things come from it.”

Might the Believers aim to exploit Olive’s family ties to multiple 828ers, even though Maxine seemed to shrug it off when the gals first met?  “That’s a good question, and it depends on your definition of ‘exploit,’” answers showrunner Jeff Rake. “There are a couple of dark characters brewing within that seemingly benevolent community, and by the middle of the season, Olive and others are going to realize that there is a grenade about to go off, and she shouldn’t be sure about who she can trust.”

Olive’s path will also cross with that of newly discovered 828er T.J, played by Garrett Wareing (PLL: The Perfectionists). “He’s a major part of Olive’s storyline this season…,” Blaise hints. “Is he a potential love interest? We don’t know. But the way that I meet T.J., people will be like, ‘Ohhhhhh!’”