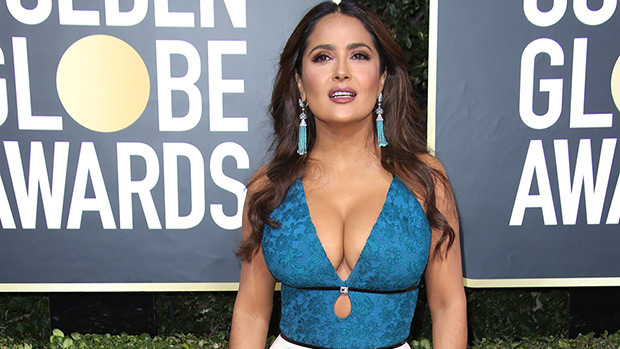 Salma Hayek turned heads on the red carpet at the Golden Globes on Sunday night. The actress, 53, looked radiant in a skintight blue and white Gucci dress. Salma showed off her amazing curves in the plunging number, which included a sultry thigh high slit and two tiny black belts — one under her chest and another on her waist. Salma, who stepped out in silver platform heels, let her long brunette hair down with loose curls. She rocked a deep pink lip with matching eyeshadow. The veteran movie star also wore a pair of dangling blue earrings.

Ahead of the Golden Globes, where Salma is presenting, she reflected on her style at the awards show in 2003. When shown a photo of her in a red hot Narciso Rodriguez gown from 17 years ago, Salma had the best reaction.

“What I remember the most about that one, is that those were the good old days where my body was so hot that I just needed something simple,” Salma told Access Hollywood of the curve-hugging look. “Those days are gone, baby,” she joked, noting, “I gotta style it up now. I didn’t even have to wear a bra in those days. Right now, forget it!” 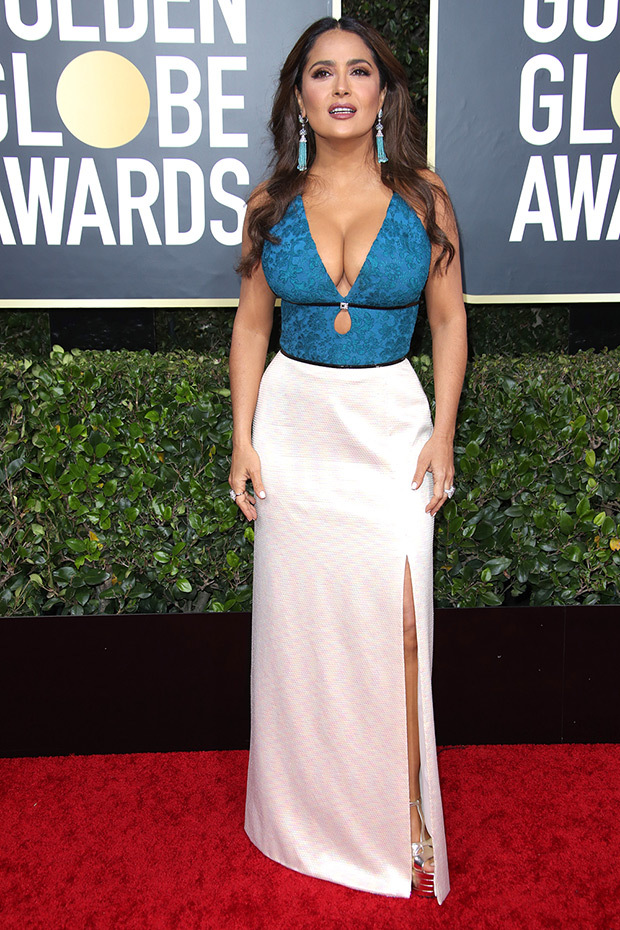 Salma stars in the upcoming movie Like a Boss, where she plays beauty mogul Claire Luna. To get into full character and channel the fierce boss woman, the actress donned red hair, sultry clothes and even gray eye contacts. But, she wanted to change her look a bit more, so she decided to try lip injections — something that didn’t go too well.

“At first, the part was a very straightforward, ambitious businesswoman,” she told InStyle magazine in an interview published on December 10. “It was fun to work with Miguel and the writers to create an actually crazy character.”

To get her over-the-top look, Salma explained that she consulted a friend of hers, who is a doctor.

“First, I wanted to do Botox and inject my lips, which I’ve never done,” she said. However, since Botox couldn’t be reversed once injected, and she had other work commitments, fillers were the next best option.

“My friend [dermatologist] Dr. [Maurice] Dray said, ‘I don’t know if you’re going to be happy because it’s going to hurt super bad.’ I said, ‘Well, let’s give it a try,’” she recalled. “He put the first needle in my mouth, and I immediately said, ‘No! Forget it! I’m done!’”

Instead, she ended up going with another solution to make her mouth more pronounced. “Instead it became, ‘How do I make it look like I have lip injections?’” she asked. Ultimately, Salma opted for wearing fake teeth!

And, it’s safe to say she doesn’t plan to get any cosmetic procedures done. “My mother always demonstrated the importance of aging gracefully,” she admitted. “I never saw her or my grandmother being afraid of getting old. And so I don’t have that fear.”