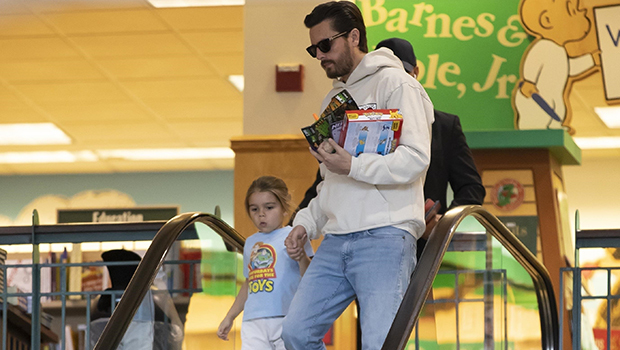 Scott Disick Is A Doting Dad To Son Reign,5, As They Hold Hands On Shopping Trip

Hold on tight! Scott Disick showed off his protective side as he held on to his five-year-old son, Reign’s, hand while the pair were out shopping on March 1.

There’s nothing like some father-son bonding time! On March 1, Scott Disick and his five-year-old son, Reign Disick, were spotted out and about enjoying the day and taking care of some errands at the mall in Calabasas, CA. Both father and son were dressed quite casually for the outing and rode the escalator together following a successful trip to one of the shops, including Barnes & Noble Jr. The Flip It Like Disick star, 36, held on tenderly to his youngest’s hand as they both stepped onto the escalator following their trip.

The outing was such a sweet bonding session between the pair, and fans loved getting a glimpse of Scott being such a doting dad. Of course, whenever Reign’s in the picture, it’s hard not to swoon over all the adorable moments he shares with his parents — including mom Kourtney Kardashian, 40. On Feb. 4, Kourt captured her little guy practically auditioning for MasterChef Junior — well, not exactly. The Keeping Up With The Kardashians star shared a slew of cute pics that featured Reign making some breakfast at the stove with the help of the family’s new pup, Cubs! Reign appeared quite concentrated on his culinary masterpiece and Kourtney was on hand to capture the moment. “Good Morning from Chef Reign and Cubs,” she captioned the images.

But when he’s not enjoying some one-on-one time with mom and dad, Reign also gets in on the fun with his two older siblings Mason, 10, and Penelope, 7. On Feb. 19, Kourtney and her brood had a true “California Weekend” when the mother-of-three took her kids to the beach in Montecito, CA. In the carousel post she made on Instagram, Kourt captured her kids playing at the beach, lounging outside, and even taking in the bright California sun! One photo, in particular, featured Reign looking quizzical as he relaxed in a lounge chair just outside the family’s beach getaway! There’s truly never a dull moment with Scott and Kourtney’s kids!

Whether he’s out and about with dad, or relaxing the day away with mom, Reign truly has it made as a five-year-old! The youngest of Scott and Kourtney’s children always brings out the best side of his parents, just like seeing his dad hold on tightly to Reign’s hand at the mall. With spring and more sunshine just around the corner, we cannot wait to see Reign enjoy some time with his parents more in the future!