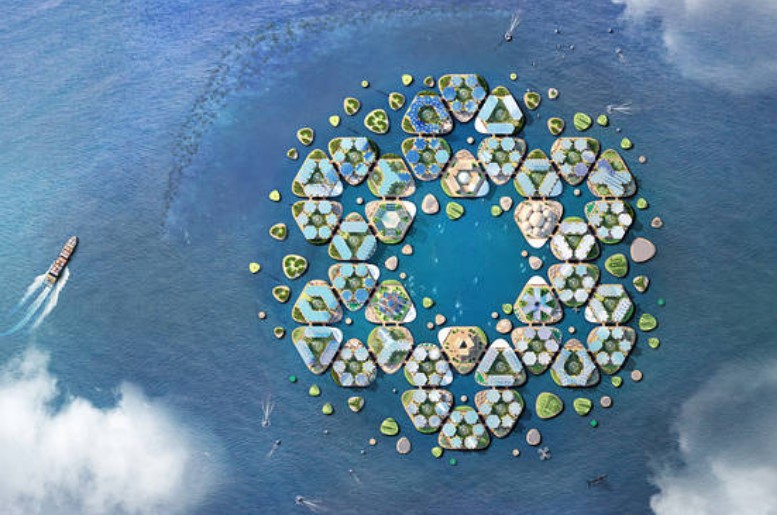 As the world’s coastal cities are increasingly threatened by rising populations and sea levels, a group of entrepreneurs, scientists, and architects has proposed self-sustaining floating cities as a possible solution.

“Nine out of 10 of the world’s largest cities will be exposed to rising seas by 2050,” Bjarke Ingels, founder of the eponymous architectural firm, said in a statement. “The sea is our fate—it may also be our future.”

His firm, working with the French Polynesian company OCEANIX, the MIT Center for Ocean Engineering, and The Explorers Club, unveiled a blueprint for a floating city, called Oceanix City, at “Sustainable Floating Cities” roundtable held at the U.N. headquarters in New York on Wednesday

The human-made ecosystem is designed to grow, transform, and adapt organically over time, evolving from neighborhoods to cities with the possibility of scaling indefinitely, Ingels said.

According to the blueprint, the modular five-acre neighborhood will offer living and working space for up to 300 residents. All built structures in the neighborhood are kept below seven stories to create a low center of gravity to resist wind. Every building fans out to self-shade internal spaces and public areas, lowering cooling costs while maximizing the roof area for solar capture.

Communal farming is the heart of every platform, allowing residents to embrace the sharing culture and zero-waste systems. Below sea level, beneath the platforms, biorock floating reefs, seaweed, and farming of oysters, mussels, scallops and clams help clean the water and accelerate ecosystem regeneration, according to Bjarke Ingels Group.

By clustering six neighborhoods, the designers aim to create a village that accommodates up to 1,650 residents, which will be further scaled to a city of 10,000 residents.

“Humans can live on floating cities in harmony with life below water,” Marc Collins Chen, the co-founder and CEO of OCEANIX, said in a release. “The technology exists for us to live on water, without killing marine ecosystems.”

Floating cities can be prefabricated on shore and towed to their final site, said Collins Chen, the former minister of tourism of French Polynesia. Although the United Nations will not be underwriting any of the costs to build a prototype, it welcomes the audacious idea. Since the climate and water ecosystems are changing, “floating cities are a means of ensuring climate resilience, as buildings can rise along with the sea,” said U.N. Deputy Secretary-General Amina Mohammed in a speech prepared for the “Sustainable Floating Cities”.

“And when entire floating communities are designed from scratch, they can be designed as climate‑neutral from the onset,” she added.