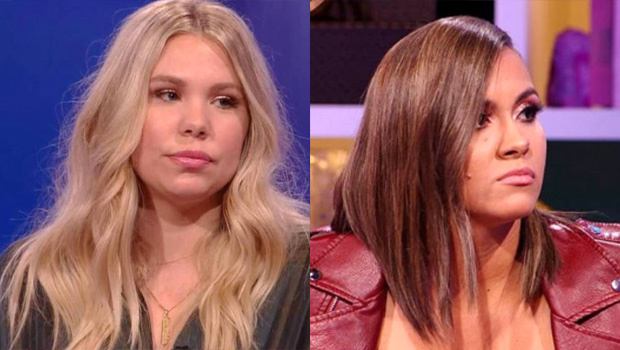 Kailyn Lowry and Briana DeJesus are feuding once again, this time over a boudoir maternity photo shoot and accusations against Kailyn’s baby daddy Chris Lopez.

Teen Mom 2 co-stars Kailyn Lowry, 27, and Briana DeJesus, 25, are feuding in public once again The drama first started on March 1, when Kail posted an Instagram photo of herself naked in a barn, next to a small horse in Iceland. It was meant to be a boudoir shot showing off her pregnant belly. Unfortunately, the comments section was less than kind about Kailyn’s photo. She ended up taking it down because of all of the negativity. But plenty of fans took a screengrab of it, so it will live on forever with Kailyn’s haters

Twitter user @GabbbyD posted the boudoir pic and wrote the harsh comment, “No mam,” to which Briana left a series of laughing so hard they were crying emoji’s. That’s when Kailyn jumped in on March 2 and responded, “Posting this photo didn’t go as planned. #yikes but remember the time shock posted the video y’all having sex?”

That was a swipe at when Briana was dating a man named Shakiel Brown — nicknamed Shock — in 2015. She broke up him when he cheated on her and she refused to speak to him after the split. As revenge, Shock posted some sexual videos of Brianna on Twitter, to which he later was charged with one felony count of video voyeurism. Bri did not take well to Kailyn’s bringing back a very bad memory from five years ago. So she hit back by bringing up Chris Lopez, the father of Kailyn’s unborn baby and her two-year-old son Lux, accusing him of beating Kailyn up. “Girl shut the f**k up! Lol go continue getting beat up by Chris,” Bri responded. 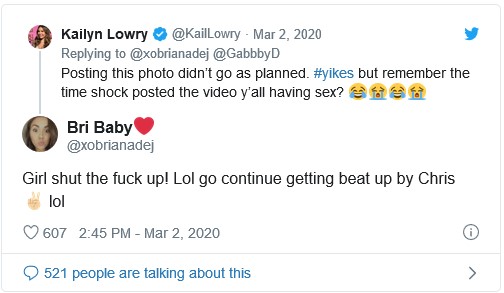 Kailyn hasn’t ever said that Chris has hit her, but Briana has made that heavy accusation in May 2018. After a Teen Mom 2 episode aired where Briana trash talked Kailyn in front of her kids, she posted a selfie and got some pretty harsh comments for her behavior towards Kail. One fan commented that if she was Kailyn, she would have smacked Bri at the show’s reunion. That’s when Brianna responded, “Too bad she didn’t and would never lol and I wasn’t talking s**t and shut the f**k up ‘cause she gets beat the f**k up by Chris in front of her kids.”

Kailyn and Chris both responded on Twitter to the claim. Kail wrote, “Some people aren’t even worth the time and energy. I’ve worked too hard on my books and degree to throw it away on someone who runs their mouth for a living.” Chris has never wanted anything to do with being part of Teen Mom and tweeted, “Let’s keep my name out of the teen mom drama ok? 1 more thing lol I never beat my BM,” which stands for “Baby Mama.”