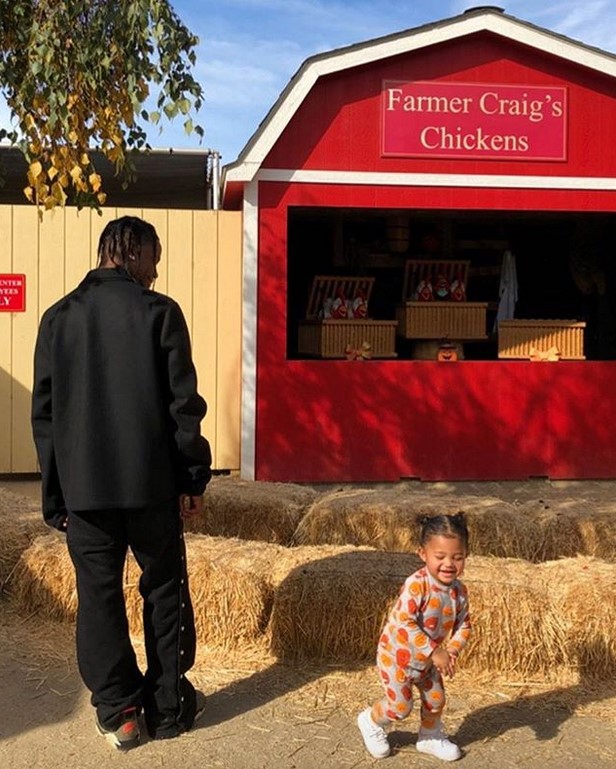 Travis Scott, 28, and Kylie Jenner, 22, got together publicly for the first time since their shocking split on Oct. 1. The pair took their little girl Stormi Webster, 1, to the pumpkin patch on Oct. 16 in an effort to make coparenting their daughter a priority. It’s the first time fans are piecing together that Travis and Kylie reunited since their breakup, but clearly the focus here was making things as normal as possible for Stormi. Travis posted about the outing on his Instagram story the same day, showing the rapper with his back turned to the camera while Stormi gleefully ran around near some bales of hay. The moment was super adorable and candid.

Stormi’s mom, Kylie, wasn’t far behind at all. The Lip Kit mogul posted a slew of clips to her Instagram story from the same outing, capturing the fun she and her daughter had at the pumpkin patch. Clips even featured Stormi running in front of her mom, with Kylie giving her followers a full look at the wide patch. “Let the festivities begin,” the Keeping Up with the Kardashians star appropriately captioned a slew of photos on her Instagram page, adding an orange heart emoji. True Thompson, 1, and Dream Kardashian, 2, were also in attendance for the autumn affair. There were no photos of Kylie and Travis together at the pumpkin patch, but their social media pages prove they were both there on the same day.

This is not the first time this little family has hit up the pumpkin patch. On Oct. 23, 2018, the trio celebrated their first Halloween season as a family with the same fall event. Sweet Stormi was only eight months old at the time, and her parents captured every endearing moment. Just like yesterday, the family took pictures and captured the milestone moment. The difference, though, is that Kylie and Travis were still together during last year’s outing, and they’re broken up this time around.

Since their split, Kylie and Travis have reiterated for fans that their one-year-old daughter is the prime focus. The former couple reportedly agreed to a 50/50 split when it comes to custody of Stormi, and both are being very mature about the entire situation. Travis even gushed about his daughter to GQ Germany on Oct. 10, saying, “[Fatherhood] is the most impressive thing that ever happened to me. Really.”