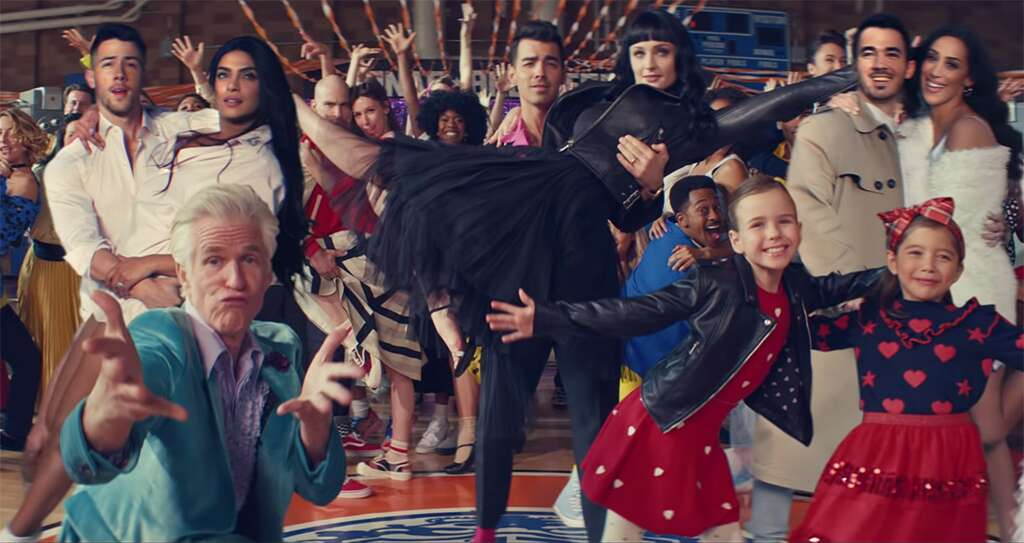 The J-Sisters are back. The Jonas Brothers released their new single and music video for “What A Man Gotta” on Friday, and it’s basically a sequel to “Sucker.”

After days of teasing the video’s release, fans finally got to watch Nick Jonas, Priyanka Chopra, Joe Jonas, Sophie Turner, Kevin Jonas and Danielle Jonasrecreate scenes from Risky Business, Grease and Say Anything. And in the song’s lyrics, the three brothers ask their loves what they have to do to lock down their love.

First up in the video is Nick, who mimics Tom Cruise’s iconic white shirt, socks and sunglasses scene from the 1983 classic. As he sings to Priyanka in his barely there shirt, “I’m not tryin’ to be your part-time lover / Sign me up for the full-time, I’m yours, all yours.”

In the second verse, Priyanka changes outfits to match Nick as he sings, “You ain’t trying to be wasting time / On stupid people and cheap lines, I’m sure, I’m sure / So I’d give a million dollars just for you to grab me by the collar / And I’m gonna be lost, be lost.” When the chorus comes back in, Sophie also changes her look, this time wearing a black wig to turn herself into Cha-Cha DiGregorio. Blonde Sophie, just like in the movie, runs off heartbroken, and Cha-Cha and Danny, er, Sophie and Joe, go crazy with their dance moves.

At long last, Kevin and Danielle’s recreation of Say Anything comes in the bridge. Kevin goes full John Cusack as he stands in a beige trench coat outside Danielle’s window with a boombox over his head. The boombox ends up not working, though, so he hilariously holds an iPhone above his head instead that’s blasting the new song. Finally, all three of the couples start doing the video’s own version of the hand jive. As the shots jump from scene to scene, Joe and Kevin both end up appearing in their underwear, just like in Nick’s scene.

At the end, all three of the couples are on the Grease dance floor for the big finish, and then a blooper reel runs. Apparently, what a man had to do was recreate film classics.