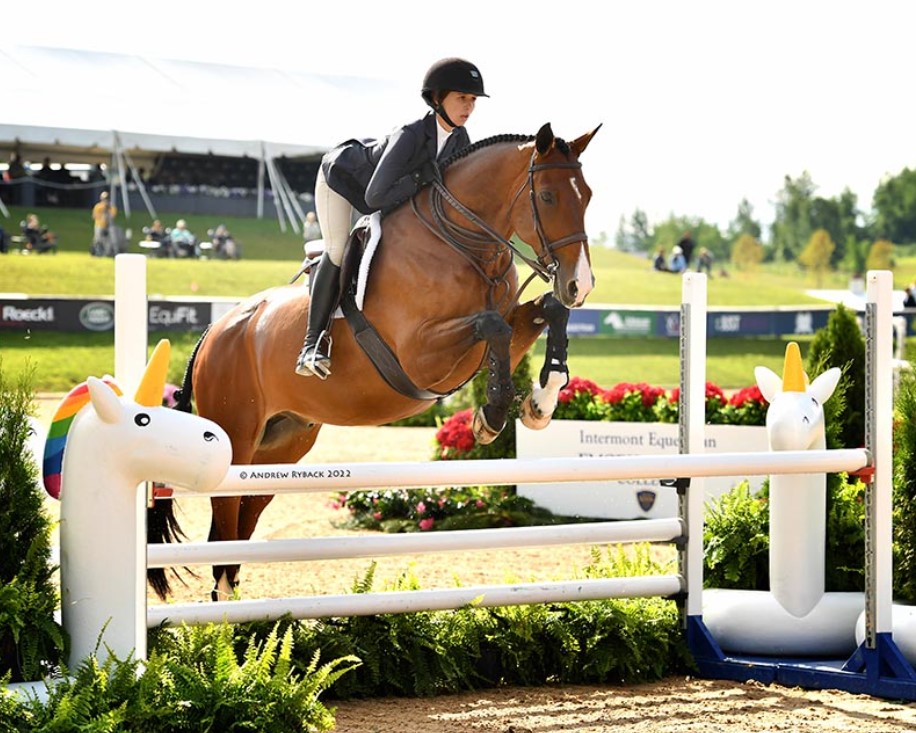 The Gladstone Cup is a three-round class that combines the precision of equitation and handiness of hunters over a course set at 3’6″.  After the first round, the top 20 contenders are invited back for Round 2, and finalists then return for a work-off to determine the winner.

In the first round, Malnik, 16 of Ocean Ridge, Florida, rode her own Charlie, a 15-year-old Swedish Warmblood gelding (Feliciano 823—Kotiljong III, Jitterbug), to a score of 92. Going second to last in the second handy round, the pair earned a 95—the highest single-round score of the day—to lift them to the overall win on a score of 187. Second place went to Jordan Gibbs on Mountain King Ranch LLC’s Cent 15 and third place to Kate Hagerty and her family’s Solitude.

“[Charlie] was with me every step of the way and knew exactly what I was asking of him,” said Malnik of her mount. “Especially getting a 95, which is the highest score I’ve gotten, I was very happy coming off that round but wanted to keep our composure because I knew I had the additional testing to do so I didn’t want to get too excited yet.”

Judges Meg Schulman and Bobbie Reber chose to call back the top six riders for testing, including swapping mounts to ride the first eight fences of the handy round. Beacon Hill Show Stables barn mates Malnik and Gibbs had no problems switching horses as the final two pairs to enter the ring. Gibb’s round aboard Charlie impressed, but not enough to top Malnik’s execution of the shortened course with Cent 15.

“We both watched each other’s horses go quite often, so I was familiar with Charlie and she was familiar with Cent,” Gibbs said of the swap. “I think we were both just ecstatic to make it to that point in general. It was a great day for Beacon Hill and I was very happy that Sterling won and super how I ended up [in the class].”

The West Coast edition of the class, the USHJA Gladstone Cup Equitation Classic—West, will be held July 24 at Blenheim EquiSports in San Juan Capistrano, California, as part of the Adequan/USEF Junior Hunter National Championships—West.

Meanwhile, qualification began this month for next year’s Gladstone Cup, which will include for the first time a division for adult amateurs. The inaugural USHJA Gladstone Cup Equitation Classic for Amateurs will be a three-round class that combines the precision of equitation and handiness of hunters over a course set at 3’. The class will be open to amateurs who are U.S. Hunter Jumper Association members and have placed first, second or third in adult equitation classes in the age group equitation at 2’9” or higher or 3’3” Adult Jumping Seat Medal class, Taylor Harris Insurance Adult Medal class, or Ariat National Adult Medal class. The qualifying period began June 1.

Original article: The Chronicle of the Horse (chronofhorse.com)