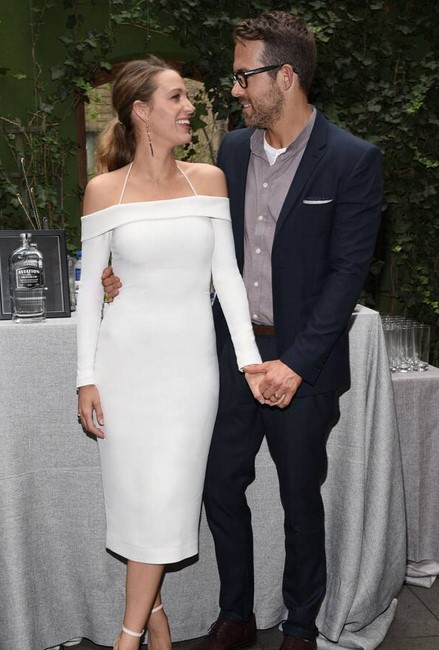 Usually when your husband takes to social media and shares one of the most unflattering pictures ever taken of you, you may chide him for his obliviousness.  Unless your husband handpicked the 10 most “oops”-riddled pictures of you and sweetly posted all of them to remind the world how much he loves you. And you’re Blake Lively, so even a blurry, mid-blink pic is still pretty good.

And that is how Ryan Reynolds chose to publicly mark his wife’s 32nd birthday in August, with a bit of affectionate trolling that has become their thing when they’re in the mood to share just how into each other they are with the online masses. Which, noticeably, they aren’t always in the mood to do, but they do so enough that fans have become downright invested in their now quietly epic love story.

Celebrating their seventh wedding anniversary Monday, they’re presumably planning something special, if not too raucous—their third child is on the way. “Normally, we make something for each other,” Lively told E! News in 2014, back when their union was on the newer side. “Because that’s something that lasts and isn’t something you just found and bought in a store.”

But how will they scratch our seven-year itch when it comes to a creative new way to sass each other on social media?

“It’s sort of like what my dad used to say,” Reynolds mused on Live with Kelly and Ryan in May. “‘If you can’t say anything nice, say something embarrassing.’ So, that’s sort of how we roll.”

The Deadpool star added, “I think it’s a sign of a healthy relationship, personally. I do.” Asked if any of his public cracks about Lively ever got him into trouble, he said he figured their fans by now know that he kids. “It gets me in trouble, you know, at home,” Reynolds quipped. “But I can handle that.”

Adorably, the river runs both ways.

“Happy Birthday, baby,” Lively wrote on Instagram when Reynolds turned 41 in 2017, captioning a photo of Ryan Gosling with her husband mainly cropped out.

When Lively was busy tweeting teasers for her 2018 thriller A Simple Favor, Reynolds pleaded for answers to the secrets the movie promised to reveal.

“Oh darling, of all the secrets I’m keeping from you, this should be the LEAST of your concerns… trust me,” Lively shot back.

Indeed, couples who don’t take themselves too seriously but treat their relationship with reverence tend to be the winners at the game of togetherness. It also helps when they appear to be on the same page about everything that really matters—which, incidentally, is all the stuff that happens behind closed doors, as well as how they process what inevitably occurs out in the world in response to the image they put out there.

Though inevitably the proof of pregnancy reveals itself, especially if the blessed event coincides with Met Gala season, but so far Reynolds and Lively have welcomed two daughters into the world without the sort of fanfare that accompanies some famous-by-proxy little ones. Their names—James and Inez—weren’t readily revealed and it’s hard to imagine the circumstances surrounding their third child’s birth being any different.

Moreover, despite the litany of couple pics on their respective Instagrams and the cheeky jabs indicating how pleased with each other they remain to this day, Mom and Dad do not share photos of their now 4 1/2 and 2 1/2-year-old kids, minus an occasional glimpse of a limb.

“My husband and I chose a profession and a side effect of that is, your personal life is public,” Lively told Marie Claire UK in 2015. “Our child hasn’t had the opportunity to choose whether or not she wants her personal life to be public or not. So in order to give her as much normality as possible, we want her to have a childhood like we had.”

She and Reynolds had resigned themselves to the fact that they’d perennially be people of interest—and their online antics make them more interesting than some—but the family-oriented actors have drawn a thick line in the sand.

In 2016, pregnant with their second child, Lively told Marie Claire, “My family: That’s the thing that I feel most protective of and the thing that I feel is the most exposed when I feel exploited. I’d rather not have to deal with it at all, but we knew the lifestyle we were getting into, and while it’s hard… it’s another thing when it’s our child. She didn’t have the opportunity to make a decision about what she wants.”

However, they did trot out the whole gorgeous family—a day to remember for its rarity—when Reynolds received his star on the Hollywood Walk of Fame in 2016

It did work better with a visual.

James and Inez will have more input on their social media footprints one day, but for now, Lively and Reynolds rule their roost—which is located on a 2-acre farm in the New York suburbs rather than any show business epicenter. And by all accounts they have a successful power-sharing agreement.

“It’s nice to have a partner in everything,” Lively once told E! News.

Reynolds, who has been open about how he’s been working out lingering father-son issues from his childhood by trying hard to be a different kind of dad, explained to Fatherly earlier this year that he and Lively try not to good-cop, bad-cop their kids.

“We don’t work in those archetypes,” with one being the main disciplinarian, he shared. “Expressing boundaries is important. I try to observe more than evaluate. You want them to grow up with a healthy sense of self but to understand that the world doesn’t revolve around them. Empathy is a big cornerstone for Blake and me. I wish they taught empathy in schools.”

As for their decision to largely shield their kids from prying eyes, Reynolds said, “We live as normal a life as we can live. Our kids aren’t a part of Instagram or social media. I talk about them, but I never post photos of them and neither has Blake. It’s not something we would want to be a part of. Being in public is a choice that people should be allowed to make when they’re of age. I would never want them to resent me for that. I want them to have as normal a childhood as possible.”

There’s at least one aspect of James and Inez’s upbringing that is at least 100-percent recognizable.

Their parents may not be showing off their baby pictures, but it’s not as if the girls aren’t the subject of plenty of dad jokes, his inclination to troll not reserved for Lively alone.

“Our pediatrician, when she met Inez, she said, ‘Oh, this one’s shady,'” Reynolds, who has become renowned for his parenting anecdotes and do-not-as-I-say advice, also said on Live With Kelly and Ryan a few months ago. “Even the other day, when we were traveling back home, we were at the airport and out of our whole family she’s the only one that got the secondary security pat down at 2 years old. She just takes it like a hard-earned felon.”

As perhaps evidenced by their witty approach to couplehood online, Lively told Glamour that Reynolds is simply her best friend.

“In other relationships, if something came up I would call my girlfriends or my sister, and say, ‘Hey, this is what he did—what should I do?’ Whereas with him, we were friends for two years before we were ever dating. And I treat him like my girlfriend. ‘I’m like, ‘Hey, this happened. It upset me. This is how I feel. What do I do?’ He does the same for me. He treats me like his best buddy.”