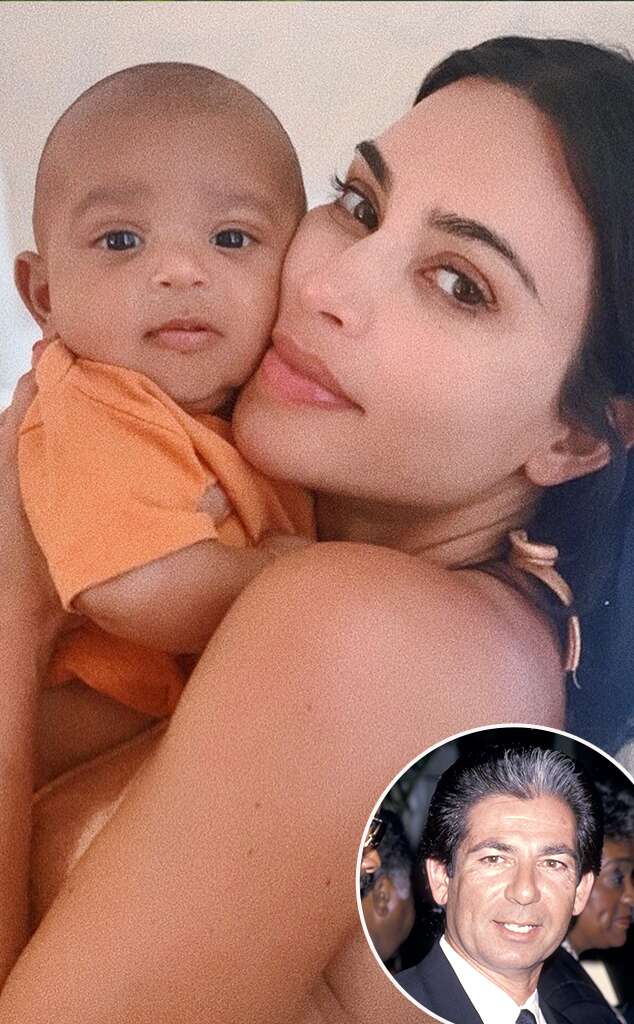 When Kim Kardashianand Kanye West’s surrogate was pregnant with Psalm West, a medium in Bali told the reality star that the baby would be the reincarnation of her late father, Robert Kardashian Sr. In an exclusive interview with E! News at the launch of her SKIMS line at Nordstroms in New York City, the mother of four opened up about the things that have happened since that have convinced her the medium was right.

Bringing up the moment from Keeping Up With The Kardashians Season 16, Episode 4, she continued, “On our show, we showed that we were in Bali, and a woman—a blind medium—came up to me and said that I was gonna have another son and that it was gonna be my father reincarnated.”

“She had no idea,” she went on. “No one knew. No one on my crew knew that I had a surrogate that was pregnant with a boy.”

The makeup mogul went on to reveal the moments that have happened off camera that have convinced her and her famous family that little Psalm has the late patriarch’s spirit.

“My baby nurse, I had to go out of town and I really needed her to come in,” she shared. “But she had a baby shower that she had to go to. And I said, ‘It’s okay, you can bring my son to the baby shower, if that’s okay with you.’ I really needed the help. She brings him to a baby shower, and a woman comes up to her and said, ‘Is this your son?’ And she said, ‘No, no, no, I’m just watching him.’ And she said, ‘Well, I just have to tell you, please tell their mom this is a family member of hers reincarnated.'”

That numerous strangers have told the 39-year-old the same is what made her start to think reincarnation could be real.

“Multiple people that had no idea that was my nanny or anything have come up to my baby to say that he’s a family member reincarnated,” Kardashian dished. “So my whole family, all the time, thinks it’s my dad and is just so emotional and close to him.”

But it’s not just comments from strangers that have the Kardashians hooked. The baby apparently shares traits similar to that of her late dad.

“He’s left-handed, like my dad,” she revealed. “So, all these things happen. I don’t even know if I believe in reincarnation, but I do now. But I want to believe it!”

One thing Kardashian is sure of, is that Psalm’s arrival helped her older children, North West, 6, and Saint West, 4, stop squabbling.

As she shared with E! News, “North and Saint are getting along, so that makes me happy.”

Then she dished about her middle baby, Chicago West, 2. As she gushed, “Chicago is so, she’s my toughest one. Nothing phases her. She actually just fell, cut her whole face and got 10 stitches on her face, my poor baby. But she’s tough. She fell, and cut herself, and was up and not even really crying about it, but that’s the hardest thing as a mom, when one of your kids get hurt. It’s the worst for a mom.”

Now, the family of six is gearing up for Valentine’s Day, one of her kids’ favorite holidays. Speaking of their plans for the special day, Kardashian shared, “We’ve already made all their Valentine’s and done all that stuff for school. Valentine’s Day every year, I volunteer at school and I’m the class mom ’cause they love that. And they make cupcakes, and it’s a whole thing.”

Her husband is one to plan quite the extravagant gifts for his wife on days like this, but Kardashian admitted she has no idea what he has up his sleeve this year.

As she explained, “Last year, when I was running out to go to school to be the class mom, Kanye was like, ‘Come here! Wait, just come here. Come say bye to me real quick.’ And he was in the living room, and of course, I walk in and Kenny G is in the living room. Just when I think he’s done it all, he comes up with something completely just magical and beautiful, so I have no idea.”

As for North, the proud mom revealed that her oldest child wishes her mama could be at school every day, not just the day Cupid comes.

“North begs me. She’s like, ‘Why can’t you work at my school? It’s not fair! I just want you to work at my school,'” she teased. “She is so upset about it ’cause her best friend’s mom is the P.E. coach and she’s one of my closest friends. And I’ve tried to explain to her, ‘Well, what happens when you move grades? I’m gonna be stuck in this grade. I can’t keep going with you to every grade.’ It’s her dream for me to work at school.”

Sorry, Northie. Kardashian’s already busy making like her father and becoming a lawyer!