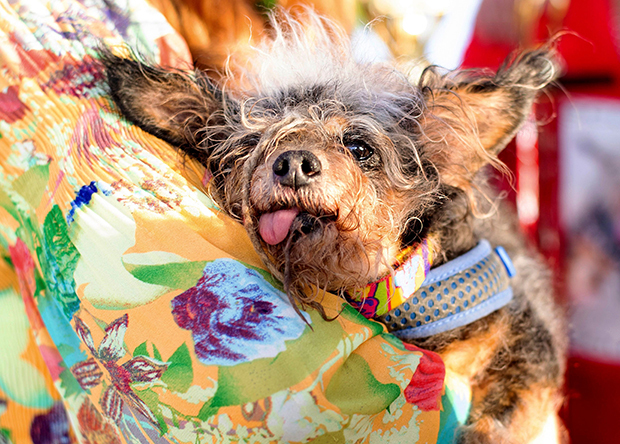 With an unruly, curly mane that “no amount of condition can calm,” Scamp The Tramp beat out 18 other dogs to win the title of World’s Ugliest Dog, according to CNN. The former stray beat out 18 other dogs battling for the crown at the Sonoma-Marin Fairgrounds & Event Center in Petaluma, California. With no teeth and a hair that would make any scuzzy Glam Rocker from 1980s Las Angeles jealous, Scamp charmed his way to the top, winning both himself and his owner Yvonne Morones a huge trophy and $1,500.

Yvonne said she rescued Scamp at the “last hour” from a Los Angeles animal shelter. “It was on the way home that I knew I made the right choice,” she said, per CNN. “There we were, two strangers in a car on the way home to a new start … It was like he knew he had found his forever home.” She told The New York Times that she found Scamp via Petfinder in 2014. “I ran across Scamp’s photo, and it was just like Tinder for dogs. I swiped right and fell in love with that face. … He rode home with me in the car and all the way home he sat next to me.” It seems as Yvonne and Scamp were meant to be together. On the way home, Bob Marley’s song, “One Love,” began to play over the radio. Yvonne looked over and saw that her new best friend was bobbing his head along with the beat.

It also seems as Scamp was destined to win this competition. He was the 2018 runner-up, and Yvonne had two previous winners in the Ugliest Dog Contest. There was Nana, a small dog with wire-like gray hair around the face and down her chest. Her other winner, Munchkin, was small, round, and covered with wild hair that stuck out on top of her back. “All of us moms think our dogs are beautiful,” Yvonne added. “We really believe our dogs are beautiful. I looked at the competition, and I go, ‘That dog’s going to win.’ I’ve called the winner every year. I didn’t think we had a chance at all.”

Yvonne also says that Scamp’s name is an homage to Yvonne’s grandmother, who warned her as a child not to talk to the “hobos” and “tramps” on the streets. However, she can’t avoid Scamp The Tramp, and neither can the rest of the world. He’s actually a very busy pooch when he’s not winning contests and winning hearts. He’s been a pet therapist for seven years, serving at the Sebastopol Senior Center. He also volunteers weekly to listen to first graders read stories. Scamp also represents the Humane Society of Sonoma County in a kissing booth at events and greeting passengers at the Sonoma County Airport. Somebody give that good boy a bone!

Wild Thang, a Pekingese with distemper, a condition that affects musculature and the nervous system, came in second. Tostito, a dog with no teeth or lower jaw, took third and the Spirit Award. Meatloaf, a bulldog mix, picked up the People’s Choice Award.