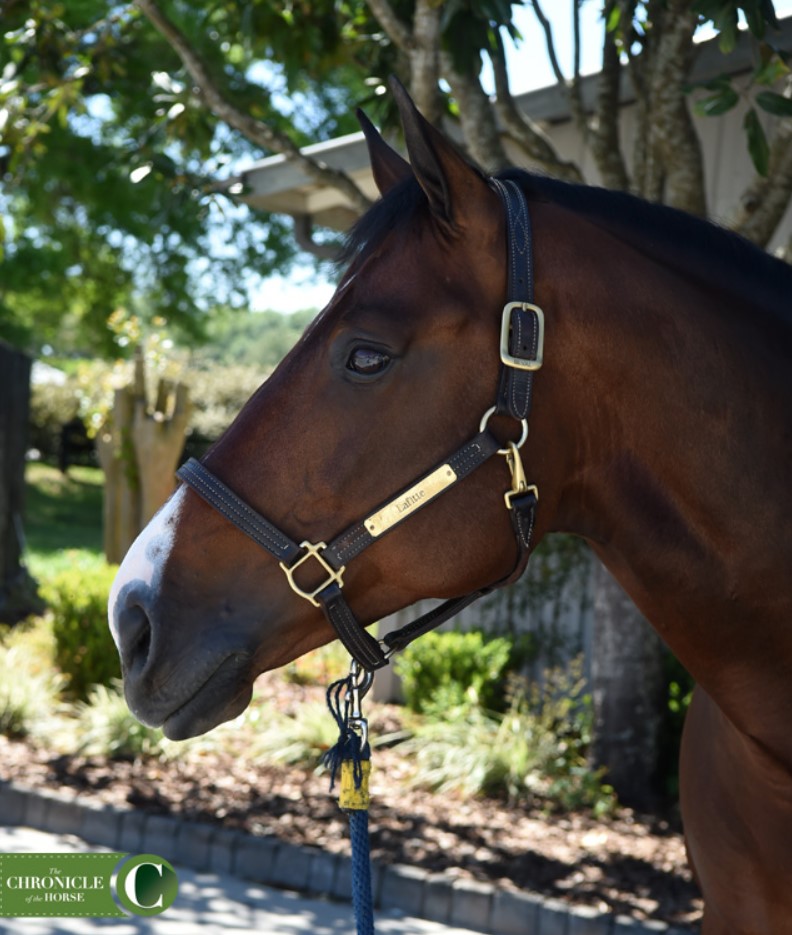 Behind The Stall Door With: Lafitte De Muze

Often riders and grooms will describe their horse as having a puppy-dog personality, but if any horse ever epitomized that phrase it would be superstar hunter Lafitte De Muze. I spent about an hour chatting with Ashmeadow Farm barn manager Tim Delovich in Ocala, Florida, and “Lafitte” quickly became my buddy, licking my hands and nuzzling my pockets for most of that time.

The 8-year-old Belgian Warmblood (Darco—Everlychin De La Pomme, Malito De Reve) may be as sweet as a children’s pasture pet on the ground, but as soon as he’s in the ring, you can’t help but be impressed by his easy way of going and that back-cracking jump.

Since Cheryl Olsten’s gelding debuted in the hunters in 2018, he’s turned plenty of heads, picking up top ribbons during the HITS Ocala (Florida)  winter circuit and Devon (Pennsylvania) with Amanda Steege in the irons. He swept the classes at Lake Placid (New York) last year to take home the grand hunter title both weeks and went on to win the $500,000 Diamond Mill Hunter Prix at HITS Saugerties (New York), the $50,000 WCHR Professional Challenge (Maryland), and was champion of the 3’6″ greens at the National Horse Show (Kentucky).

In 2019 his accolades have included winning the $50,000 National Horse Show Hunter Classic and the 3’9″ green championship at the National, a second-placed finish in the $100,000 WCHR Peter Wetherill Palm Beach Hunter Spectacular (Florida), reserve at Devon, and third in the Platinum Performance USHJA 3’6″/3’9″ Green Hunter Incentive Championship (Kentucky).

Go behind the stall door with us to get to know the hunter whose fan club is expanding daily.

“He can get a little bratty,” said Delovich. ”He’s usually a perfect angel with me. He doesn’t paw; he doesn’t do anything bad. It usually comes out when he hears Amanda’s voice. The weeks he doesn’t show he really misses the attention. He’s fine with it for most of the day, but by the afternoon, he’ll see me come out of the feed room, and he looks at me and grabs his blanket and throws it on the ground. He’s like, ‘Do something with me!’ ”

“He’s super mellow; he doesn’t think he’s anything special,” said Delovich. “He just thinks this is what a horse is supposed to do. He’s super friendly, easy to work around.

“He always looks like he wants to do it, not because you’re asking him,” Delovich continued. “He’s like, ‘Yeah, let’s go do that together.’ It’s not like, ‘Ohhh OK.’ ”

“I refer to him as Amanda’s boyfriend,” he said. “I’m like, she loves him more. She got to pick [him] out. That’s the fun part. That even though Cheryl owns him, Amanda got to pick out the horse, and he doesn’t need to do the amateur job. He’s definitely a pro horse, and she got to pick him out. An old client said, ‘He has all the best parts of all of her past best horses.’ ”

“He’s pretty friendly with all the horses but doesn’t worry about where they are so much or anything,” said Delovich. “I can put anyone next to him in the trailer or a stall or anything.”