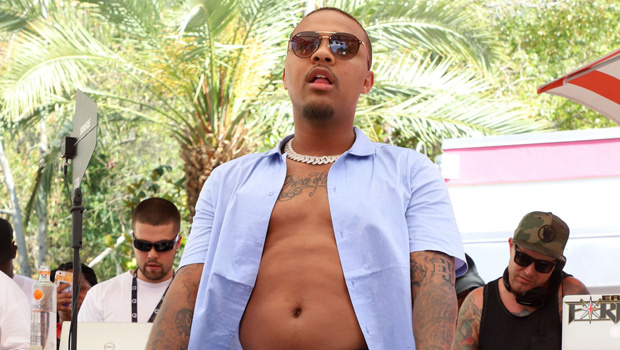 Bow Wow took a bit of a tumble after getting hyped up during his performance on the ‘Millennium Tour’ in Philadelphia, PA on Mar. 7.

Bow Wow‘s excitement got him right off the stage during his performance on the night of March 7! The 32-year-old rapper was performing during his set on The Millennium Tour in Philadelphia, PA when he seemed to fall right off the side of the stage at one point. In a video posted by The Shade Room, he can be seen wearing a black shirt, black pants, and a black hat as he holds the microphone and runs across the stage while rapping to a loud cheering crowd. After going to the edge of the stage, he backs up and falls completely off but quickly gets back up.

Bow Wow’s mishap didn’t seem to ruin the show and his enthusiasm seems to only prove he’s loving being on stage. The talented artist was added to the epic tour, which also features Ashanti, Lloyd, Pretty Ricky, Soulja Boy, and more, in Nov. 2019, when Omarion replaced B2K with him after a headline-making feud with Lil Fizz, one of the members of the group. He shared the shocking news on Fizz’s 34th birthday making things even more dramatic.

“We are so excited to announce The Millennium Tour 2020,” Omarion’s announcement about the tour began. “Come rock with  @omarion @shadmoss, @therealyingyangtwins @curlyheadedblackboy @sammiealways @prettyricky and @souljaboy! Tour cities will be announced on Monday, December 2nd.”

When Bow Wow isn’t joining forces with Omarion for music, he’s making waves with his personal life. He got some attention in Oct. 2019 when he posted a gorgeous throwback pic that showed him kissing model Tyra Banks, 46. “Thinking about @tyrabanks,” his caption for the photo read. He also added a crying emoji to it, prompting many fans to think he was missing the brunette beauty.