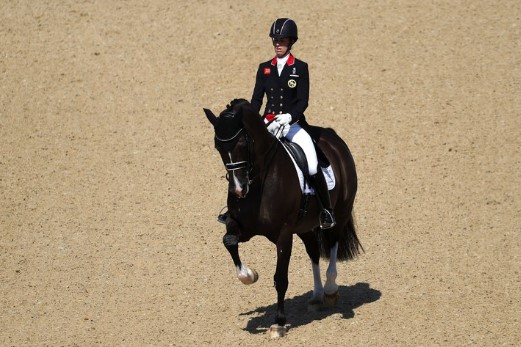 In addition to the classical Olympic events, the following forms of competition are seen. In North America they are referred to as “English riding” in contrast with western riding; elsewhere in the world, if a distinction is necessary, they are usually described as “classic riding”:

Hunt seat or Hunter classes judge the movement and the form of horses suitable for work over fences. A typical show hunter division would include classes over fences as well as “Hunter under Saddle” or “flat” classes (sometimes called “hack” classes), in which the horse is judged on its performance, manners and movement without having to jump. Hunters have a long, flat-kneed trot, sometimes called “daisy cutter” movement, a phrase suggesting a good hunter could slice daisies in a field when it reaches its stride out.

The over fences classes in show hunter competition are judged on the form of the horse, its manners and the smoothness of the course. A horse with good jumping form snaps its knees up and jumps with a good bascule. It should also be able to canter or gallop with control while having a stride long enough to make a proper number of strides over a given distance between fences. Hunter classes differ from jumper classes, in which they are not timed, and equitation classes, in which the rider’s performance is the focus. Hunter style is based on fox hunting, so jumps in the hunter division are usually more natural colors than the jumps in a jumper division.

Eventing, show jumping and dressage, described under “Olympic disciplines,” above are all “English” riding disciplines that in North America sometimes are loosely classified within the “hunt seat” category.

Saddle seat, is a primarily American discipline, though has recently become somewhat popular in South Africa, was created to show to best advantage the animated movement of high-stepping and gaited breeds such as the American Saddlebred and the Tennessee Walker. Many Arabians and Morgans are also shown saddle seat in the United States. There are usually three basic divisions. Park divisions are for the horses with the highest action. Pleasure divisions still emphasis animated action, but to a lesser degree, with manners ranking over animation. Plantation or Country divisions have the least amount of animation (in some breeds, the horses are flat-shod) and the greatest emphasis on manners.

Show hack is a competition seen primarily in the United Kingdom, Australia and other nations influenced by British traditions, featuring horses of elegant appearance, with excellent way of going and self-carriage. A related event is riding Horse.