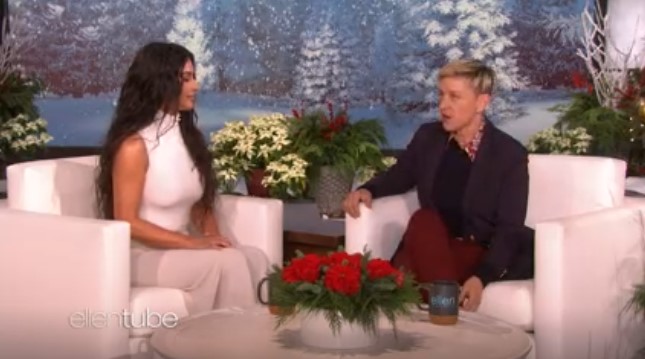 When the KarJenners go on ‘Ellen,’ they have to talk about the entire family. Kim Kardashian revealed Kylie Jenner and Travis Scott’s current relationship status during her Dec. 17 appearance.

Kim Kardashian’s always got the scoop on her family — for the most part. Ellen DeGeneres asked Kim, 39, about Kylie Jenner, 22, and Travis Scott’s relationship and whether or not they’re back together. “I don’t know,” Kim cryptically said. “Isn’t that what I always say when I come here?” Ellen kept pressing Kim for answers and also brought up a huge diamond ring that Kylie was recently spotted wearing.

“I honestly don’t know. But I think that they are just really close friends and co-parenting amazingly,” Kim continued. “The big ring…definitely they’re not engaged and I think she’s wearing it on a different finger. I do know that she… I think she bought that herself because she was showing us.” She added, “I don’t know the status if they’re together or not. I don’t think they are.” So basically, she does know the status!

Kylie and Travis, 28, split up in Oct. 2019. However, they’ve been dedicated to co-parenting their daughter, Stormi Webster, 1. Travis was spotted hanging out with the KarJenner family over the Thanksgiving holiday weekend, sparking rumors that Kylie and Travis may have gotten back together. HollywoodLife learned EXCLUSIVELY what’s going on between the two.

“Kylie and Travis are not fully back together but they’re working on their relationship and spending more time together as parents,” a source told HollywoodLife. “There’s no time table for the future at all, and their biggest focus is raising Stormi together, not [getting back together] as a couple.” That doesn’t mean they can’t flirt with each other, though! Kylie posted Instagram photos of herself wearing only a bra for a photo shoot on Dec. 16 and Travis “liked” the photos.