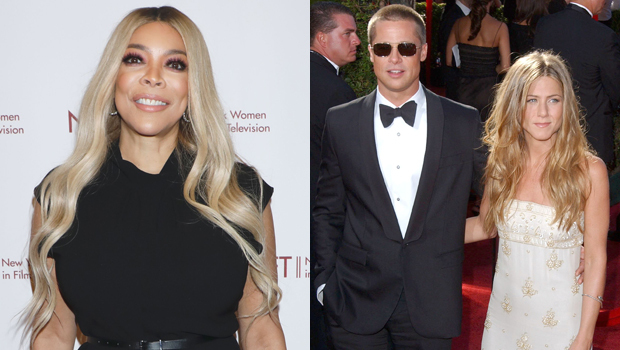 Wendy Williams is all for a Brad Pitt and Jennifer Aniston romance nearly 15 years after they split. The host gushed over the pair on her Dec. 17 show after news that the actor attended his ex-wife’s Christmas party over the weekend!

Round two? Wendy Williams wants Brad Pitt and Jennifer Aniston to give love another try! After news that the actor, 55, attended his ex-wife’s holiday party at her Bel-Air home on December 14, the talk show host, 55, polled her studio audience about the former husband and wife.

“Am I the only one who wants to see Brad Pitt get back with Jennifer Aniston?”, she asked viewers on her December 17 show. “I want them back together because the reason why is, I feel like they have both grown up,” Wendy explained, admitting that she believes it was his most recent ex-wife, Angelina Jolie who was responsible for Brad and Jen’s 2005 split. — A topic that’s been up for debate since their untimely divorce.

“But, Brad was the dumbbell because Brad was already married and he knew what he had to lose,” Wendy continued, referencing how quickly Brad struck up a romance with co-star Angelina, 44, on the set of their romance thriller, Mr. & Mrs. Smith in 2004. The pair met on set of the film and sparks instantly flew. Angelina later admitted that she had fallen for Brad while filming the movie.

“With this Brad Pitt and Angelina Jolie thing, I’ve forgiven him, and whatever she was lacking that Jolie gave him. She can go around saving the whole planet, but at the end of the day, you and Brad did Jen dirty,” Wendy said before she gushed over Brad’s attendance at Jen’s recent Christmas party.

“I don’t know what they’re doing, but you know what guys, I like it, I really do,” she went on, adding that the two should make a red carpet debut this awards season. “What would really stun me is if they walk the red carpet together holding hands. Whether they win or not doesn’t matter to me, they’d style steal the whole carpet. I’d be all over that!”

Brad attended Jen’s holiday party this past Saturday night and was reportedly one of the last guests to leave her Bel-Air home. Other stars in attendances including, Tom Hanks and Rita Wilson, Reese Witherspoon, Kate Hudson, and Lisa Kudrow. And, ironic enough, Brad’s other ex, Gwyneth Paltrow was there with her husband, Brad Falchuk. Brad also attended Jennifer’s 50th birthday party in February.

Brad and Jen, 50, will reunite again in the coming weeks as they’ve both been nominated for awards at the 2020 Golden Globes and the 2020 SAG Awards. This should be fun!