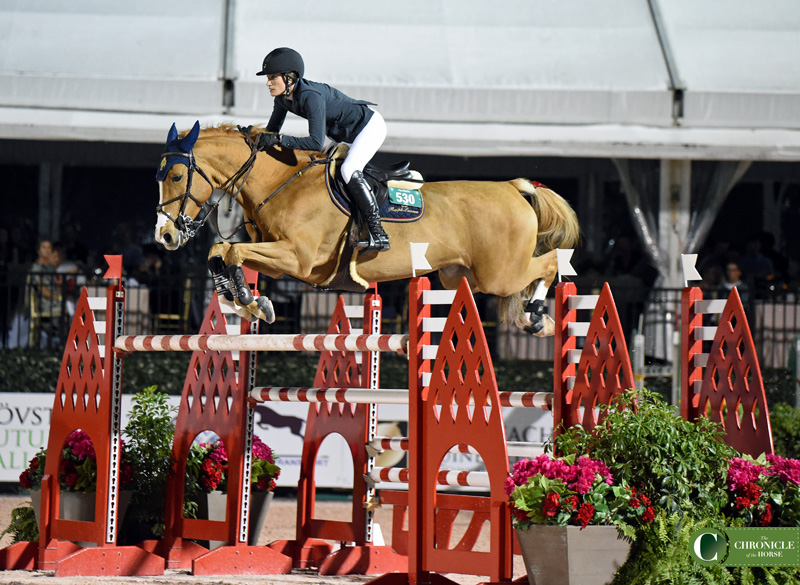 Late-Game Decision Pays Off For Springsteen At WEF 6

Before she even landed off the first fence of the jump-off in the $137,000 CSI3* Grand Prix, Jessica Springsteen was pretty sure she’d already lost. She and Volage Du Val Henry had a little bit of a miscommunication on take-off to that first jump and elicited some gasps from the crowd.

The scrappy mare kept the rails in the cups, but Springsteen wasn’t positive it’d stayed up.

“I thought I would still try to go fast in case I knocked one down because she’s such a fast mare,” Springsteen said. “I thought I had fence 1 down and got really distracted. Kind of honestly rode really badly, but [she] jumped amazing, so I’m really lucky to have her. She’s such a talented mare, and she really tried her heart out tonight.”

Springsteen’s day has been a little hectic, to say the least. Just two hours before the start of the class at the Winter Equestrian Festival, she was piloting Don Juan Van De Donkhoeve to a fifth-placed finish in the $213,300 Longines Grand Prix as part of the Palm Beach Masters series.

Following that presentation, it was a mad dash to the Adequan Global Dressage Festival showgrounds to jump her 11-year-old Selle Francais (Quidam De Revel—Cassina, Cassini I) in the Friday Night Lights class.

“This week was busy; I actually wasn’t even going to show here and focus on Deeridge, but she jumped so well the last week [a grand prix was held in the AGDF stadium, during Week 4] I decided to come back. I was fifth in the grand prix at Deeridge, so I was kind of coming off of that momentum for tonight—gave me a little energy boost.”

Nine pairs advanced to the jump-off, and only two jumped clear around the short course. The other of those two riders was Rachel Cornacchia on Valkyrie De Talma. The Canadian could hardly believe she was sitting in the press conference, as it’s her first time competing at WEF.

“This is actually my very first time in Florida; so far loving it—this was a great start!” she said. “Usually we go to California; it’s a little bit closer for us; we live in Calgary. We feel like we have the horses and wanted to step it up a little bit this winter, so we decided to make the trip here. It’s just an amazing venue; the whole concept of this whole horse village is just amazing. We’re just having a good time so far. Today is my third anniversary with her—she’s my valentine today.”

Rounding out the top three was Ali Wolff, who brought out her veteran partner Casall. They were looking good until the double combination late in the jump-off, where the stylish chestnut pulled a rail. But their footspeed was enough to make them the fastest of the 4-fault finishers (and the fastest of the class) by stopping the timers in 33.18 seconds.

“I always have to go in riding my own ride, and he’s gotten quicker and quicker through the years,” said Wolff. “I should have added one; I kind of went for it because I knew there were a lot of strong competitors behind me. We’ll practice that for next time, and he’ll get a little bit of a break, and he’ll come back out at the end of the circuit.”