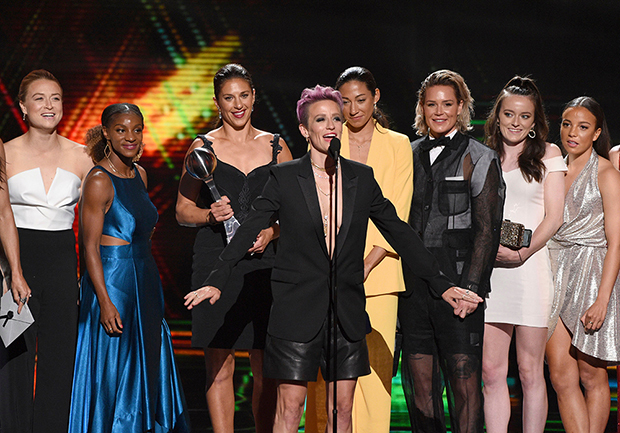 The United States Women’s National Soccer Team’s victory lap took the World Cup champions to Los Angeles for the 2019 ESPY Awards on July 10. Megan Rapinoe, 34, Alex Morgan, 30, Carli Lloyd, 36, Rose Lavelle, 24, and the rest of the championship squad appeared during the awards show, which was incredible considering that they spent the morning in New York City just hours earlier However, no jet lag was going to stop this team, as they took the stage to accept the honor for Best Team, which was presented to them by none other than Sandra Bullock.

Co-captain Megan was the first to rush up to the stage and take the trophy from the actress, and viewers were obsessed with the unique outfit she wore during the show — leather shorts paired with a plunging black blazer! Of course, her signature purple locks were also on full display. Eventually, the rest of the team joined her, and it was Carli who gave the acceptance speech. “We literally just got off a plane a couple of hours ago, got hair and makeup in the plane, and we look pretty fabulous, I think,” she admitted. “Thank you to ESPN, all of our followers, supporters around the world. It’s been an incredible journey. I’m super proud of all of these 22 fabulous ladies! Props to all of you. Thank you so much, and here’s to the next World Cup in another four years.”

However, before signing off, Megan went up to the microphone and added, “I’ve dropped the f-bomb on every stage I’ve been on for the last three days, so we’ll just spare you that. Thanks for having us! Everyone have an amazing night.”

Hours before the USWNT’s appearance at the ESPYs, they were lighting up the streets of New York City. The Big Apple honored the US women with a ticker tape parade, and the team basked in the adulation of a million fans who gathered along the “Canyon of Heroes” to cheer on the World Cup champions. One of the more deafening chants heard during the parade was “U-S-A / EQUAL PAY.” The team sued the U.S. Soccer Federation in March 2019 over gender-based discrimination and demanded that they get paid equal to their male counterparts.

“Despite the fact that these female and male players are called upon to perform the same job responsibilities on their teams and participate in international competitions for their single common employer, the USSF, the female players have been consistently paid less money than their male counterparts,” the lawsuit said, per ESPN.

The USWNT Players’ Association and the USSF agreed on a new collective bargaining agreement that ensured that the team would continue to play, but the new CBA failed to resolve many areas of grievance, per Sports Illustrated. The USWNT alleged that they earn as little as 38% as the US Men in similar working situations, that they work in inferior working conditions and have experienced lower-quality travel conditions.

If that wasn’t bad enough, The Wall Street Journal audited U.S. Soccer financial statements and found that between 2016 and 2018 – after the women won the 2015 World Cup – the USWNT games generated $50.8 million. During that same time, the USMNT games generated 2% less, pulling in $49.9 million. Oh, and during that time, the men failed to qualify for the 2018 World Cup, whereas the women just went back-to-back.

These claims and reported financial statements are pretty damning. There might be a resolution in sight, though. The USSF and the USWNT agreed to enter mediation after the World Cup in hopes of working out their differences.