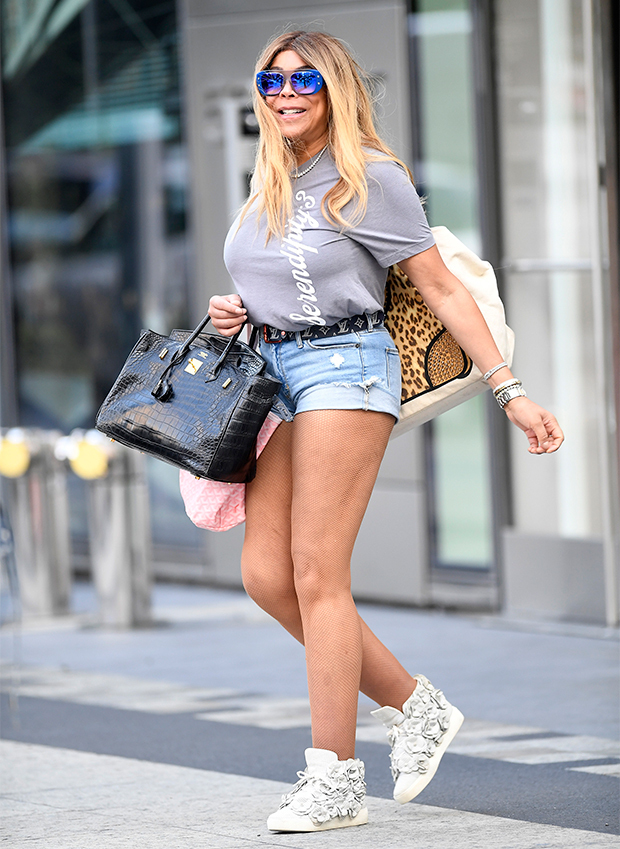 New York just survived a heat wave, but we don’t think we would have made it without air conditioning and incredibly short shorts. Clearly Wendy Williams was in the same boat, because she donned the tiniest pair of Daisy Dukes for the trip to work on July 24.

Wendy, 55, looked gorgeous in the distressed denim cutoffs, which she paired with a grey t-shirt that said “Serendipity 3” up the front. She rounded out her look with blue sunglasses, a pearl necklace, a black Louis Vuitton belt, three bags, and white sneakers.

The outing comes just one day after the host of The Wendy Williams Show revealed that she won’t be changing her name after filing for divorce from Kevin Hunter on April 10. After being asked if she’s changed her last name on credit cards and bank accounts after ending a nearly 22-year marriage, Wendy gave an emotional response.

“No, my name is Wendy Hunter. That’s my son’s name,” she told Karen Hunter on the July 23 episode of SiriusXM’s The Karen Hunter Show, referring to her 18-year-old son Kevin Hunter Jr. “And you can’t take away 20… don’t make me cry.”

Wendy confirmed that she’s “happy,” “healthy” and at “peace with the world and everything around me,” despite “going through a situation with [her] family.” Karen later tried to ask if Wendy not changing her last name meant their was “a chance” the former couple could reconcile, but the talk show host shut that down quickly. “No. Don’t ask. No! Girl. No. Don’t ask. I know what you’re saying,” Wendy said, adding, “But my family is good, and we’ll always be family.”