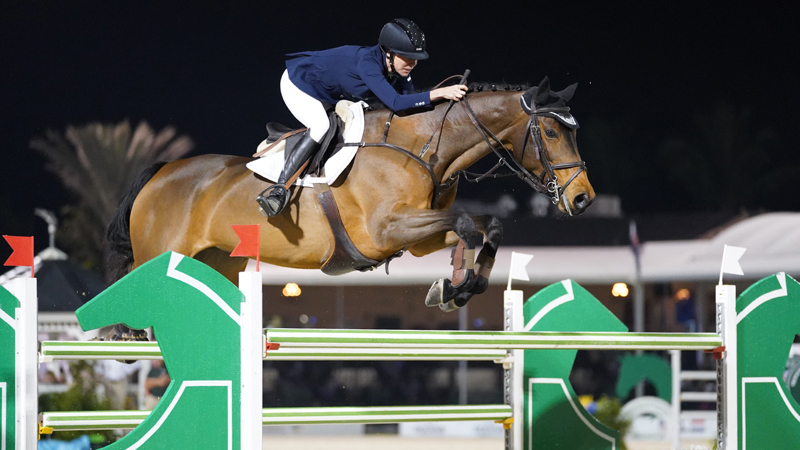 Winner Of The Week: Two Alpha Females Work Out A Life-Changing Victory In $137,000 Adequan Grand Prix

Erin Davis-Heineking wasn’t looking for a way back into show jumping when her husband, Christian Heineking, suggested she try a new mare in the barn.

“Every year at our farm we have a little New Year’s jumping competition; you get on a horse you don’t know, and we have a high jump competition,” Davis-Heineking said. “My husband said, ‘You’re going to get on this horse Leonie and try it,’ and I said, ‘No, no, no, no way! She’s too hot.’ She had just come in from Europe, and I was really just flatting horses around for fun at the time.”

“He managed to get me on her, and we ended up winning the little barn competition,” Davis-Heineking said with a laugh. “Then everyone in the barn was packing up to go to a horse show the next week, and Christian said, ‘Why don’t you come along and show her?’ ”

That was two years ago. Fast-forward to Saturday night, Jan. 25, during Week 3 of the Winter Equestrian Festival in Wellington, Florida, and Davis-Heineking found herself standing atop the podium in the $137,000 Adequan Grand Prix CSI3*, with her daughter joining her in the ring to accept the winner’s sash.

“It was an amazing night; it was so great to come out of the in-gate and see all the people there, and all our friends were so happy for us,” Davis-Heineking said. “I used to ride with Todd [Minikus] years ago, and he was there, and he was just giddy, so to see all of them so happy was really awesome.”

It was a stroke of bad luck in the barn in conjunction with her pregnancy that made Davis-Heineking hang up her stirrups for a while.

“I had two really great top horses that I’d made, one I bred and foaled out at my farm and the other my sister bought in utero,” Davis-Heineking said. “So I put a ton of time and energy into bringing them along, and then right when we started doing really well I got pregnant and had a baby, which was the greatest thing I ever did, but when I was ready to come back to the sport my horses weren’t.

“My one horse had a career-ending injury in his stall,” she continued. “The other also got injured and never came back to the level, so I just took a break. I just got down. I was finding more joy in raising my child than my riding. I just lost my hunger, and when you don’t have a hunger in this sport you don’t do very well. I thought, ‘This is dumb. Why am I sacrificing my time with my family if I’m not going to go out there and really take it on?’ So I retired, and I was fine with it. I was really happy and peaceful.”

Davis-Heineking continued riding a bit, but she mostly stayed out of the show ring for a few years, focusing on raising Ella at the family’s October Hill Farm in Hudson Oaks, Texas.

“My husband was off showing all the time, and I started missing him, and honestly I started to get really out of shape,” Davis-Heineking said with a laugh. “I was like man, I’m 40 years old, and I’m getting flabby, and I hate going to the gym, so I started flatting horses at home just to stay in shape.”And then Leonie arrived. The 11-year-old Oldenburg mare (Leo Von Faelz—Castella, Chacco-Blue) was purchased as a sales project for Christian, but after Davis-Heineking’s successful New Year’s high jump she took over the ride.

“I ended up showing her some more and more, and he talked me into going here and there and riding a few more, but I had put it in my mind that I wasn’t getting sucked back in,” Davis-Heineking said. “No, no, I’m 40, I’m a mom, I’m not doing this anymore. Then we went to Chicago for a two-star, and that’s where Christian fell and had a major injury.”

In August of 2018, a young horse flipped over on Christian and fractured his femur, necessitating surgery and a lengthy recovery.

“We hired another professional rider to keep Christian’s horses going, and then he really focused in on me and said, ‘OK, you’re doing this now,’ ” Davis- Heineking said. “We started doing a lot of schooling and started stepping up and doing more FEI stuff.”

The pair entered their first FEI class soon after Christian’s injury and then rotated the bigger international classes with national amateur-owner and grand prix classes.

“We don’t really buy made grand prix horses, so we took our time building her up, stepping her up in classes and bringing her back down,” Davis-Heineking said. “It was a lot of work to get her to the level, because when I first started riding her I couldn’t even sit my butt in the saddle to canter her; I had to stay in a half seat because if I sat on her she was gone, she was just so hot.”

When it came time to plan their 2020 show calendar, Davis-Heineking suggested Florida.

“We usually go out west and follow the World Cup classes, but I said, ‘Why don’t we go down to Wellington and just see where we are?’ ” Davis-Heineking said. “I used to compete here quite a bit, so we came down and thought, ‘Let’s see what happens.’ ”

What happened is Davis-Heineking outran some of the fastest riders in the world, beating Shane Sweetnam and Kent Farrington on her way to the top spot.

“That’s my biggest win in company like that for sure, but I had a good training ground in Texas,” Davis-Heineking said. “You know if you want to win even a national grand prix back home you have to beat Tracey Fenney, Brian Moggre, my husband; we have some really great riders.”

Davis-Heineking isn’t sure what the future holds for her and Leonie.

“That was a life-changing night,” she said. “It was life-changing for me and the horse, and it’s a little bittersweet, because the whole world is coming for her now. I came out of the in-gate, and on one side you have all the people celebrating with you, and on the other you have all the people waiting to ask about buying her. That’s the business though; that’s how it goes.”

There are other sport ventures brewing on Davis-Heineking’s horizons.

“When I stopped riding I still wanted to be involved in the horses so I could actually be around my husband, so I decided to get involved in horse shows with raising money for them and putting on the grand prixs,” Davis-Heineking said.

She worked with Southbound Show Management on their show series that runs out of the Will Rogers Equestrian Center in Forth Worth, Texas.

“I brought Derek Braun down to look at the facility we were using, and he said, ‘Holy cow, this place is great! Why don’t we put in a bid for a World Cup qualifier?’ ” Davis-Heineking said. Braun’s Split

“I thought, ‘Oh, you’re funny,’ ” Davis-Heineking continued. “And he said, ‘No really,’ so I thought, ‘Well, why not?’ and we got it! I’m officially a horse show owner now, and we’re putting on a World Cup qualifier in Forth Worth in December of this year, so I’ll have plenty to keep me busy.”