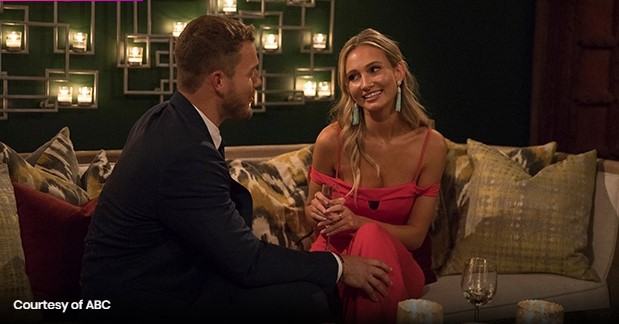 Contestants have been known to wear unicorn heads, dress up like dolphins and even don a wedding gown to get the attention of The Bachelor during their limo arrivals. But Colton Underwood has a contestant who is pulling a very clever stunt to stand out, as beautiful blonde love hopeful Bri put on an Australian accent upon meeting him. She walks up to him in a sexy red dress as he introduces himself and then he picks up on her voice as she tells him “So nice to meet you.” “You’ve got a nice accent. Where are you from?” Colton asks the 24-year-old.

She doesn’t technically lie, as she does not tell him she’s a Los Angeles resident. Instead she responds to the hunky 26-year-old virgin, “The accent, it’s Australian. I was hoping you’re kind of a sucker for accents.” It turns out he is as he tells Bri “I love it.” Later on she reveals in a confessional “I’m not really Australian, but you have to do what you can to stand out” in a stone cold American voice. Bravo Bri! We can’t believe no one has thought to try this in the past and we’re all the way up to season 23 of The Bachelor.

Fans are applauding her gravitas and making herself memorable to Colton. After the show posted the video to their Instagram and Twitter pages on Jan. 4, the comments section went nuts. “Oh my gosh she’s going to be my favorite!” one viewer declared while another wrote “This is the most excited I’ve ever been to see something unfold on this show. If this doesn’t blow up in flames I’ll be so sad.” It’s unclear how long the LA based model will continue to string along Colton into thinking she’s from down under, but that accent is so sexy and he sure seems to love it.

Not only is Bri’s fake accent winning over Colton, she’s already gaining fans before the show premieres on Jan. 7. “Found our favorite contestant this season,” one fan commented and another added “She’s my fav so far.” One woman joked “lmaoooo. At least her lies will always sound great.” Another person pointed out “Respect for how she dodged the actual question.”

Here’s what we know about the non-Aussie: Her name is Brianna Barnes and according to her bio on ABC’s Bachelor page,  “She played soccer for eight years, enjoys hiking and camping, and loves to hit the snowboard slopes. Her biggest dating fear? Farting too loudly.”  Yes, it really says that. Fun facts include that her favorite sport to watch is hockey, she’s been modeling since she was 14 years old and Bri loves it when her date notices her outfit.