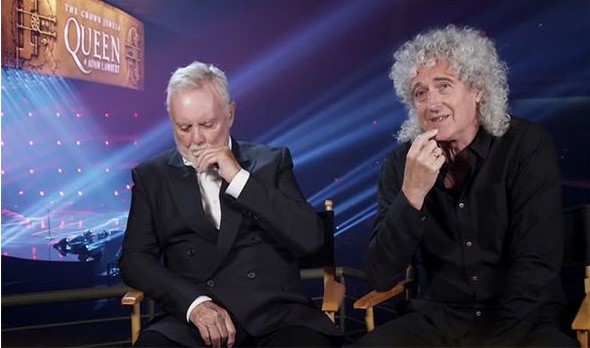 BOHEMIAN RHAPSODY icons Brian May and Roger Taylor were very “reluctant” about the Freddie Mercury and Queen biopic for one major reason. They reveal all on the DVD, Blu-ray, digital and download packages for the movie.

The movie has been shepherded to the screen across ten long years by the Queen legends. They were attacked ahead of its release by critics and commentators who accused them of selling Freddie short and not telling the whole truth of his extraordinary but complicated life. The movie has answered critics with its enormous $846million box office, making it the biggest movie drama of all time, beloved by fans and garlanded by awards ceremonies. May himself has revealed the biggest reason he was “reluctant” about the film.

From the outset, May and Taylor have been clear BOHEMIAN RHAPSODY was a labour of love and was something motivated by their love for their much-missed bandmate and their love for the incredible music they all created together.

So May’s biggest worry was understandable.

He said: “In truth, we were reluctant in the beginning because it’s difficult to do a film that would do Freddie justice but we realised if we didn’t get involved we wouldn’t be able to protect Freddie’s legacy.”

On the new home entertainment packages, he reveals his feelings about what Rami Malek and the other actors achieved.

May said: “Casting Rami in the role of Freddie absolutely blew us away the first time we met him.”

Taylor added: “They got very close to us visually and as actors which made it particularly uncanny to watch. After a couple of viewings, I mean you start to completely believe, ‘Oh that was us.’ No, it’s not.”

Malek also explained how involved the iconic pair were and how they affected everyone on set.

Malek said: “Having Brian May and Roger Taylor involved was crucial. I think having them around allowed everyone to get a piece of them in a way and understand them.

“We definitely did not want to let them down and if there was ever anything the thought was not working it was always addressed.”