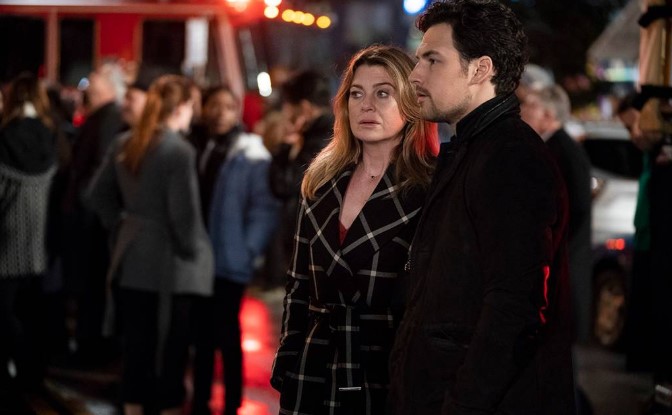 Has there ever been a party on Grey’s Anatomy that didn’t go badly in some way or another?

Tonight’s party went pretty bad. It could have been worse, but it had to be pretty bad to go right along with the record-breaking episode that sent the show past ER’s 331 episodes, making it the longest running medical drama on TV.  But that’s irrelevant to the fire, the missing mother, the broken relationship, the punching, the reluctant guest of honor, the people walking in on other people, and once again, the fire.

We knew a fire of some kind was coming from the opening moments of the episode, and so we waited throughout all of the expert foreshadowing. The candle that Jackson lit for the Catherine’s surgery party wasn’t secure, a fireplace was going while Mer and DeLuca tried to hook up in the guest room, the whole party was filled to the brim with candles that at any point were about to be the cause of a major disaster.

In the end, it was not a major disaster at all.

When Webber walked in on Meredith and DeLuca making out in the guest room at the party, Mer freaked out and decided she just had to act “normal.” She decided that “normal” meant taking over for the staff in the kitchen, putting more of the endless eggrolls on a platter and sticking them in the oven.

And then it turned out that the platter they used was plastic, and it was Mer and DeLuca who accidentally started the fire, which didn’t even do all that much damage aside from some fumes that made the penthouse unlivable for a few days.

After the drama of the night, Mer and DeLuca headed back to his place to finish what they started in the guest room, only to find his sister Carina there along with his dad, who he was definitely not happy to see.

The party was also just a little ruined by Koracick punching Owen in the face, after Owen said he wasn’t a father and he wouldn’t be allowed near his and Teddy’s kid. Koracick was, of course, a father, but Owen didn’t seem to care. Owen was in an even worse mood because Betty/Brittany had left with her parents and Leo without even telling them goodbye, and Amelia didn’t know what kind of relationship she and Owen were supposed to have now without the kids who brought them back together.

As they were figuring that out, Betty/Brittany’s parents returned, deciding that they couldn’t raise Leo and care for their recovering drug addict daughter at the same time, and Owen and Amelia were really Leo’s parents.

Meanwhile, Alex’s mom showed up out of nowhere rambling about Lewis and Clark, leaving Alex and Jo to spend all night keeping tabs on her, and Catherine felt totally weird about the party being thrown for her, since she wasn’t even cancer-free. But after Catherine helped convince Bailey to buy her dream $800 blender, Bailey got Catherine to the party, just in time for all the hell to break loose.

It wasn’t a particularly special episode considering the occasion, but what we can’t stop thinking about is Meredith Grey, and how much fun it is to watch her, you know, start fires with egg rolls.

We’ve watched her go from the bottom of her career up to the top, we’ve watched her fall deeply in love with one guy and get married (ish) and have a family, and then we’ve watched her lose that one guy and hit rock bottom. Now, we’re getting her second act. The one where she’s still at the top of her career, still breaking records, still one of the top surgeons, while she’s still raising her family and finally letting herself have the fun she never even really had before because of how “dark and twisty” she always was.

She’s so much sillier now, hooking up in other people’s houses with a hot Italian guy who just wants to stare into her eyes and kiss her face, and running around parties trying to “act normal” like she’s a teenager trying to throw off her parents. It’s fun to watch, it looks like Pompeo and Gianniotti are having fun playing it, and it’s a completely refreshing version of this character who’s been through an absolutely ridiculous amount of trauma in her life. She deserves this, whether he’s the second love of her life or just a really, really hot fling for a while.

And after we’ve endured all 15 seasons of her trauma and her dark and twisty-ness, we so deserve to watch it.