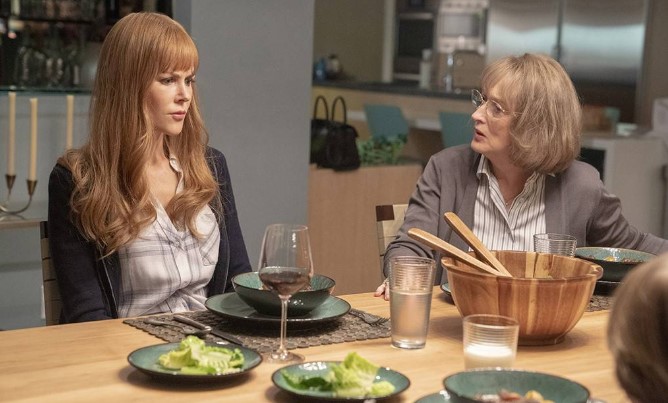 The moms of Monterey are back, and they’re joined by one of the greatest, most iconic actresses on the planet.

For many who were unsure they wanted a second season of what was originally supposed to be a limited series, the announcement that Meryl Streep was joining the season two cast of Big Little Lies changed a lot of minds, and it turns out she loved the first season just as much as we did.

“I loved this show,” Streep told reporters during the HBO portion of the TV Critics’ Association press tour. “I was addicted to it. I thought it was an amazing exercise in what we know and what we don’t know about people, about family, about friends, how it flirted with the mystery of things, what was unsaid, unshown, unknown, was sort of the pull, the gravitational pull of the piece, and it was so exciting, so when I got the chance to join the crew, I thought yeah. I wanted to do it, to be in that world. The world that was created was amazing.”

And to be honest, if we weren’t in already, we are now. So in. We will 100% watch Meryl Streep continue to demonstrate, “an amazing exercise in what we know and what we don’t know about people, about family, about friends, how it flirted with the mystery of things, what was unsaid, unshown, unknown, was sort of the pull, the gravitational pull of the piece,” even if this sentence makes no grammatical sense.

Streep was joined by stars Zoë Kravitz, Laura Dern, Reese Witherspoon, Nicole Kidman, and Shailene Woodley, along with EP David E. Kelley on stage for the panel, and an important question they all had to answer was why there was a season two at all, when it was originally billed as a one season deal.

“I will say we all said goodbye at the end, a big goodbye, but we became very close and had such a good time and the desire to spend more time together was a huge part of it, but also there was an enormous demand from the audience,” Kidman said. “I’ve never been in something that had reached so far globally, and that was such a compelling idea in terms of putting it together again. It was very much generated by actual audiences and their desire…”

Kelley explained that the end of season one “didn’t really close the chapter.”

“It ended on a very open note of what’s going to happen next. Will the lie have a life? What will it do to the equation of these friendships, the relationships, the marriage…” he said. “Everybody up here can get jobs. We didn’t want to do this unless we could at least have a fair shot of living up to the bar that we felt we had all set in year one.”

Witherspoon explained that they were in a little bit of a “difficult spot” for season two, since Liane Moriarty’s book season one was based on did not have a sequel, but the author wrote what Witherspoon called a “novella” for the show to use as a season two template. She even named a new character Mary Louise specifically hoping Streep (whose real name is Mary Louise) would play her—a fact which Streep learned on stage, thanks to Kidman.  Mary Louise is the mother of Celeste’s (Kidman) dead abusive husband Perry (Alexander Skarsgard), and while she couldn’t say much more than that, she could give a little bit about the relationship between Mary Louise and Celeste.

“You love me,” Kidman said.

“I do, actually,” Streep agreed. “And I do love her, that’s the truth. That’s the only thing I’ll tell you.”

As for whether there might be more Big Little Lies, don’t count on it. Kelley says there is “no such plan now” for a season three.

“We like where our closure is at the end of season two, so that will probably be it.”

“That’s what you said last time,” Kidman pointed out.